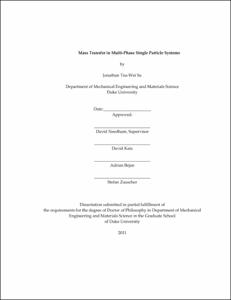 This thesis addresses mass transfer in multi-phase single particle systems. By using a novel technique based upon the micropipette, the dissolution of liquid and gas droplets in a liquid medium can be observed. Three classes of experimental systems are observed: pure liquid droplet dissolution in a pure liquid environment, miscible mixture liquid droplet dissolution in a pure liquid environment, and solute-containing liquid droplet dissolution in a pure liquid environment. Experiments on the dissolution of pure droplets of water in n-alcohols and n-alkanes showed that water droplets dissolved ten times faster in the alcohols as compared to in the alkanes. When solubility was taken into account, however, and diffusion coefficients calculated using the Epstein-Plesset equation, diffusion constants for alkanes were twenty five times higher in alkanes than for the corresponding alcohol (for example 12.5 vs 0.5 x 10-8 cm2/s for pentane and pentanol). This difference in rates of diffusion of the single molecules reflects the effect of hydrogen bonding on small solute diffusion, which is expounded upon in Chapter 2.