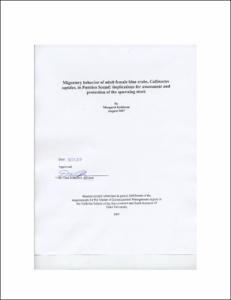 Files
Paper
1.5 Mb
Appendix A.1
1.0 Mb
Appendix A.2
2.5 Mb
Appendix A.3
195.4 Kb
Appendix B
2.2 Mb
Date
Author
Goldman, Margaret
Advisor
Rittschof, Daniel
Repository Usage Stats
336
views
1,645
downloads
Abstract
The blue crab, Callinectes sapidus, supports North Carolina’s largest and most valuable commercial fishery, but according to the 2004 stock assessment, recent fishery-dependent and -independent data suggest the population is in decline. Of particular concern is the status of the spawning stock. Annual recruitment is largely dependent on the size of the spawning stock. A decline in spawning stock abundance and biomass predicts future decline in the population. In order to develop effective management strategies to protect the spawning stock, it is first necessary to (1) understand the migratory behavior of adult female crabs within the Croatan Albemarle Pamlico Estuary System (CAPES) and (2) acquire data that can be used to accurately assess the status of the spawning stock. Assessment of the spawning stock in the CAPES is currently based on the assumptions that crabs remain in the estuary to spawn and that mature female abundance peaks in the estuary in late summer/early fall. However, recent studies on blue crab reproduction and migration indicate that blue crabs have multiple clutches, migrating seaward with each successive clutch. Upon reaching coastal waters, crabs do not reenter the estuary. Instead, they continue to spawn in the ocean. Based on this new model, peak spawning occurs in the ocean in the fall. In this study, I examine trawl and gill net survey data collected by the NCDMF to evaluate the use of these surveys in assessing the spawning stock. The demographics of female crabs caught in each survey indicate that gill net survey data collected year-round in east Pamlico Sound may provide a better estimate of spawning stock abundance than trawl survey data collected in June and September in central and west Pamlico Sound. A comparison of the east gill net survey data with post-larval settlement in the estuary suggests that a cumulative index, which would provide us with an estimate of the total number of crabs migrating to the ocean each year, would be a more accurate reflection of the spawning population than a monthly index.
Type
Master's project
Department
Nicholas School of the Environment and Earth Sciences
Subject
Blue crab (Callinectes sapidus)
North Carolina
fishery management
stock assessment
Permalink
https://hdl.handle.net/10161/396
Citation
Goldman, Margaret (2007). Migratory behavior of adult female blue crabs, Callinectes sapidus, in Pamlico Sound: implications for assessment and protection of the spawning stock. Master's project, Duke University. Retrieved from https://hdl.handle.net/10161/396.
Collections
More Info
Show full item record