Modernity, Sanitation and the Public Bath: Berlin, 1896-1933, as Archetype 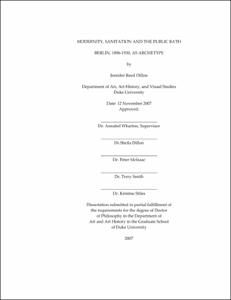 View / Download
29.1 Mb
Date
Author
Dillon, Jennifer Reed
Advisor
Wharton, Annabel J
Repository Usage Stats
1,129
views
5,143
downloads
Abstract
This dissertation documents and analyzes the architecture of the working-class bathhouse - its emergence in the nineteenth-century and revision and continued elaboration in the twentieth. It is a case study that examines how social ideas about modernity, health, and the body were translated into the built environment at a formative moment in Western urbanization. The first two chapters take a transnational perspective, with a survey of several urban centers (London, New York, Montreal). Chapter Three and Four focus in on Berlin as the central case study. The hygiene movement was deeply concerned with the built environment from its inception. Concepts of circulation and order were imbued with powerful health values, producing designs for the bathhouse that emphasized separation, regulation and a radically simplified space. Changing concepts of public life and the civic body shaped architectures of hygiene and inflected their decorative programs. A historical, spatial narrative of architecture and the body politic is opened up by a history of the bathhouse, which crosses Old World-New World, Historicist-Modernist, and Wilhelmine-Weimar boundaries. The substance of this research is drawn from previously unexamined archival and archaeological evidence from city bathhouses constructed in Berlin during the Wilhelmine period (Turmstrasse, SchillingsbrÃ¼cke, Baerwaldstrasse, Dennowitzstrasse, Oderbergerstrasse and Gerichtstrasse Volksbadeanstalten), as well as the Weimar period (Mitte and Lichtenberg). The discussion of Weimar bathhouses includes a reading of Strandbad Wannsee (Martin Wagner, Richard Ermisch), Stoedieck and Poelzig's plans for the Thermenpalast (1929), and the graphic record of Heinrich Zille's Rund um's Freibad (1926). Critical perspectives rooted in the spatial politics of Lefebvre, Bourdieu, Benjamin, and Althusser help evaluate bathhouse architecture as a representational medium, a productive gadget, and a medical technology. The resulting history argues not only that social hygiene played different kinds of roles in the development of modern architecture, but also that changing concepts of the hygienic body generated diverse modes of interaction between the individual and the public sphere.
Type
Dissertation
Department
Art History
Subject
Art History
Architecture
History, European
Permalink
https://hdl.handle.net/10161/430
Citation
Dillon, Jennifer Reed (2007). Modernity, Sanitation and the Public Bath: Berlin, 1896-1933, as Archetype. Dissertation, Duke University. Retrieved from https://hdl.handle.net/10161/430.
Collections
More Info
Show full item record