Systematics of the Lichen Family Verrucariaceae and Evolution of the Rock-inhabiting Habit within a Group of Ecologically Diverse Fungi (Chaetothyriomycetidae, Ascomycota) 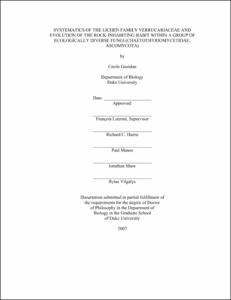 View / Download
24.6 Mb
Date
Author
Gueidan, Cecile
Advisor
Lutzoni, FranÃ§ois
Repository Usage Stats
489
views
2,371
downloads
Abstract
Verrucariaceae are a family including mostly lichenized species (Verrucariales, Ascomycota). Its current generic classification, which mainly relies on three morphological characters (spore septation, thallus structure, and hymenial algae), has never been subjected to molecular data. Because these characters were suspected to be homoplastic, the monophyly of the genera as currently delimited based on morphology need to be assessed. A three-gene phylogenetic analysis was carried out using three methods (Maximum Parsimony, Maximum Likelihood, and a Bayesian approach) on 83 taxa, selected from 15 genera in Verrucariaceae. Ancestral state reconstructions were undertaken for four characters (spore septation, thallus structure, hymenial algae, and upper cortex structure). The results confirmed that most of the genera were not monophyletic, and that the most recent common ancestor of Verrucariaceae was most likely crustose, lacking hymenial algae, and with simple spores and a pseudocortex. The use of symplesiomorphic traits to define Verrucaria, the largest and type genus for the Verrucariaceae, as well as the non monophyly of the genera Polyblastia, Staurothele and Thelidium, explain most of the discrepancies between the current classification and a classification using monophyly as a grouping criterion. In order to accommodate newly inferred monophyletic groups, existing genera were re-delimited and three new genera were proposed. Recent broad-scale phylogenetic analyses have shown that Verrucariales was sister to Chaetothyriales, an order first known as including mostly saprophytes and opportunistic animal and human parasites. Investigations of fungal communities colonizing rocks in extreme environments have shown that some slow-growing melanized fungi inhabiting bare rock surfaces belonged to the Chaetothyriales. Multigene phylogenetic analyses were carried out using Maximum Likelihood and a Bayesian approach in order to confirm the affiliation of 25 of these rock isolates. Ancestral state reconstructions were then undertaken on two different datasets to look at the evolutionary history of lichenization within Pezizomycotina, and the rock-inhabiting habit within Eurotiomycetes. Results suggest that the ancestor of the lineage including Verrucariales and Chaetothyriales was likely to be an extremotolerant non-lichenized, rock-inhabiting fungus. Virulence factors of opportunistic parasites within Chaetothyriales, such as melanization and meristematic growth, might have primary been adaptations for life in extreme habitats.
Type
Dissertation
Department
Biology
Subject
Biology, Botany
Biology, Molecular
lichen taxonomy
substrate preference
Eurotiomycetes
character evolution
ancestral state reconstruction
molecular phylogenetics
Permalink
https://hdl.handle.net/10161/433
Citation
Gueidan, Cecile (2007). Systematics of the Lichen Family Verrucariaceae and Evolution of the Rock-inhabiting Habit within a Group of Ecologically Diverse Fungi (Chaetothyriomycetidae, Ascomycota). Dissertation, Duke University. Retrieved from https://hdl.handle.net/10161/433.
Collections
More Info
Show full item record