Non-Taxation and Representation: an Essay on Distribution, Redistribution, and Regime Stability in the Modern World 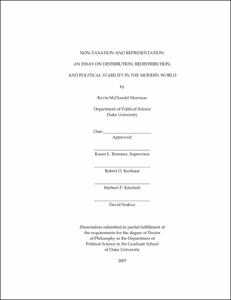 View / Download
4.7 Mb
Date
Author
Morrison, Kevin McDonald
Advisor
Remmer, Karen L.
Repository Usage Stats
473
views
1,206
downloads
Abstract
Drawing upon formal modeling, cross-national statistical analysis, and in-depth case studies, this dissertation explores the relationship between patterns of government revenue generation and political regime stability. Considering both tax and non-tax revenue (the latter of which includes foreign aid and revenue from state-owned natural resource enterprises), and building on recent redistributive theories of regime change, I use formal modeling to generate testable hypotheses about the impact of non-tax revenue on regime dynamics in both democratic and authoritarian regimes. The central prediction is that rises (falls) in non-tax resources increase (decrease) the stability of authoritarian and democratic regimes, by reducing (increasing) redistributional conflicts in society. I provide evidence supporting the implications of the theory for both redistribution and regime stability, drawing upon cross-national time-series statistical analysis as well as in-depth examination of three theoretically important cases: Bolivia, Mexico, and Kenya.The research has important implications for three bodies of literature. First, it advances the broad literature on the political economy of redistribution. The existing literature has generally assumed that government revenues are raised solely by taxation, the source of redistributional conflict. I demonstrate that this is not a plausible assumption---non-tax revenue makes up about a quarter of government revenue on average, and in some countries represents the large majority of government revenue---and that in fact non-tax revenue systematically decreases redistribution.Second, building on this insight, I advance the literature on democratization by developing a theory of how government revenues---both their size and their source---factor into regime change. This work builds on and extends recent influential works that have focused on formally modeling the distributional dynamics underlying regime transitions. Finally, the research sheds light on commonalities between literatures studying different areas of the world. In particular, it argues that there are similarities between insights developed in the literature on the "rentier" state---principally regarding how oil revenues affect regime dynamics---and those developed in the literature on foreign aid and political regimes. The reason is that oil revenues and aid are significant examples of a broader set of resources---non-tax revenues---whose importance has been underappreciated.
Type
Dissertation
Department
Political Science
Subject
Political Science, General
Democratization
Regime Transition
Redistribution
Oil
Foreign aid
Borrowing
Permalink
https://hdl.handle.net/10161/440
Citation
Morrison, Kevin McDonald (2007). Non-Taxation and Representation: an Essay on Distribution, Redistribution, and Regime Stability in the Modern World. Dissertation, Duke University. Retrieved from https://hdl.handle.net/10161/440.
Collections
More Info
Show full item record