Investigation of Seal and Dogfish Depredation in Gillnets 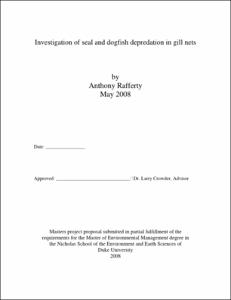 View / Download
2.0 Mb
Date
Author
Rafferty, Anthony
Advisor
Crowder, Larry B
Repository Usage Stats
328
views
1,461
downloads
Abstract
Impacts of predation by seals and dogfish on fish caught in gillnets has been largely neglected. This is important in Cape Cod’s Fixed Gear Sector because all discarding associated with predation is counted against the sector’s Total Allowable Catch (TAC). This results in a loss of profits for fishermen within the sector. Between June 3rd and July 3rd 2007, sixty-one gillnet hauls were observed during regular commercial fishing activities in order to investigate predation rates of both species. Allometric regression was used in tandem with weight conversion factors to determine the estimated total weight of eaten and discarded fish in each haul. Spatial relationships and predation rates relative to certain environmental variables were also investigated. Results showed that approximately 2,500 lbs of fish was discarded from a total catch weight of nearly 130,000 lbs because of predation by both seals and dogfish. This represented an estimated $2,500 loss from a total catch value of $64,000, signifying a 3.53% loss of the fishermen’s gross profits. The biggest monetary loss was associated with the monkfish catch. With regard to environmental variable significance, there was a correlation between increased net soak duration and increased predation by both species. The water depth at which nets were set was also significant; however, this was only in relation to seal predation with predation events generally occurring between 25 and 31 fathoms. Seal events occurred mainly over clay and, dogfish over a sandy substrate, however, bias may exist in these latter findings based on the predominance of nets being set on sand. Furthermore, spatial investigations highlighted that fishing practices were taking place in closed and restricted areas. Overall, results suggest that amendments need to be made to the NEFMP to ensure a reduction in discarding associated with predation by seals and dogfish. Also, although the gross profit loss appeared low, further investigations involving net profit loss would place these findings in greater context.
Type
Master's project
Department
Nicholas School of the Environment and Earth Sciences
Subject
Gillnets
Seal
Dogfish
Depredation
Predation
TAC
Permalink
https://hdl.handle.net/10161/466
Citation
Rafferty, Anthony (2008). Investigation of Seal and Dogfish Depredation in Gillnets. Master's project, Duke University. Retrieved from https://hdl.handle.net/10161/466.
Collections
More Info
Show full item record