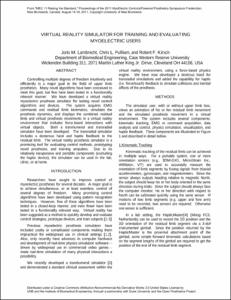 View / Download
481.7 Kb
Date
Authors
Lambrecht, Joris M.
Pulliam, Christopher L.
Kirsch, Robert F.
Repository Usage Stats
487
views
564
downloads
Abstract
Controlling multiple degrees of freedom intuitively and efficiently is a major goal in the field of upper limb prosthetics. Many novel algorithms have been conceived to meet this goal, but few have been tested in a functionally relevant manner. We have developed a virtual reality myoelectric prosthesis simulator for testing novel control algorithms and devices. The system acquires EMG commands and residual limb kinematics, simulates the prosthesis dynamics, and displays the combined residual limb and virtual prosthesis movements in a virtual reality environment that includes force-based interactions with virtual objects. Both a transhumeral and transradial simulator have been developed. The transradial simulator includes a dexterous hand and haptic feedback to the residual limb. The virtual reality prosthesis simulator is a promising tool for evaluating control methods, prototyping novel prostheses, and training amputees. Due to its relatively inexpensive and portable components (excluding the haptic device), the simulator can be used in the lab, clinic, or at home.
Permalink
https://hdl.handle.net/10161/4712
Citation
Proceedings of the MEC’11 conference, UNB; 2011.
Collections
More Info
Show full item record