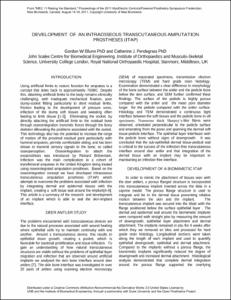 View / Download
287.8 Kb
Date
Authors
Blunn, Gordon W.
Pendegrass, Catherine J.
Repository Usage Stats
2,603
views
1,881
downloads
Abstract
Using artificial limbs to restore function for amputees is a concept that dates back to approximately 700BC. Despite this, attaching artificial limbs to the body remains clinically challenging, with inadequate mechanical fixation, poor stump-socket fitting particularly to short residual limbs, friction leading to the development of pressure sores, infection of the stump soft tissues and sweating often leading to limb disuse. Eliminating the socket, by directly attaching the artificial limb to the residual bone through osseointegration transmits forces through the bony skeleton alleviating the problems associated with the socket. This technology also has the potential to increase the range of motion of the proximal residual joint particularly with humeral amputees, permits comfortable sitting, and has been shown to transmit sensory signals to the bone; so called osseoperception. Osseointegration to attach the exoprosthesis was introduced by Rickard Brånemark. Infection was the main complication in a cohort of transfemoral amputees in the United Kingdom being treated using osseointegrated amputation prostheses. Based on the osseointegration concept we have developed intraosseous transcutaneous amputation prostheses (ITAP) which attempts to overcome the problems associated with infection by integrating dermal and epidermal tissues with the implant, creating a soft tissue seal around the implant. This article is a summary of the research and development of an implant which is able to seal the skin-implant interface.
Permalink
https://hdl.handle.net/10161/4806
Citation
Proceedings of the MEC'11 conference, UNB; 2011.
Collections
More Info
Show full item record