The Future Of Brain-Computer Interfaces: Meeting The Expectations 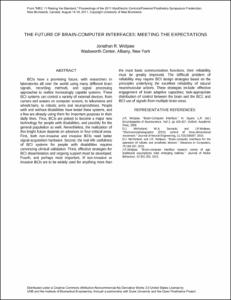 View / Download
270.2 Kb
Date
Author
Wolpaw, Jonathan
Repository Usage Stats
1,031
views
387
downloads
Abstract
BCIs have a promising future, with researchers in laboratories all over the world using many different brain signals, recording methods, and signal processing approaches to realize increasingly capable systems. These BCI systems can control a variety of external devices, from cursors and avatars on computer screens, to televisions and wheelchairs, to robotic arms and neuroprostheses. People with and without disabilities have tested these systems, and a few are already using them for important purposes in their daily lives. Thus, BCIs are poised to become a major new technology for people with disabilities, and possibly for the general population as well. Nevertheless, the realization of this bright future depends on advances in four critical areas. First, both non-invasive and invasive BCIs need better signal-acquisition hardware. Second, the real-life usefulness of BCI systems for people with disabilities requires convincing clinical validation. Third, effective strategies for BCI dissemination and ongoing support must be developed. Fourth, and perhaps most important, if non-invasive or invasive BCIs are to be widely used for anything more than the most basic communication functions, their reliability must be greatly improved. The difficult problem of reliability may require BCI design strategies based on the principles underlying the excellent reliability of natural neuromuscular actions. These strategies include: effective engagement of brain adaptive capacities; task-appropriate distribution of control between the brain and the BCI; and BCI use of signals from multiple brain areas.
Permalink
https://hdl.handle.net/10161/4813
Citation
Proceedings of the MEC'11 conference, UNB; 2011.
Collections
More Info
Show full item record