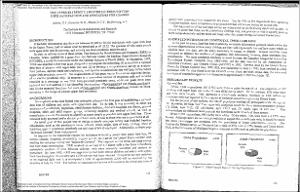 View / Download
972.6 Kb
Date
Authors
Atkins, D. J.
Donovan, W. H.
Heard, D. C. Y.
Muilenburg, A. L.
Repository Usage Stats
423
views
202
downloads
Abstract
It has been documented that there are between 85,000 to 90,000 individuals with upper limb-loss in the United States, half of whom wear no prosthesis at all. The question of why some people with upper-limb loss do not wear, and actively use their prosthesis, must be asked. In order to address some of these issues, The Institute for Rehabilitation and Research (I1RR) in Houston, Texas, applied for a grant from the National Center for Medical Rehabilitation Research (NCMRR), a newly formed center under the National Institute of Health (NTH) In September, 1992, TIRR was awarded a two-year grant designed to accomplish the following; (1) to establish a national data base of persons with upper-limb loss and (2) to develop a comprehensive survey to evaluate their past use, current needs and preferences, and specific considerations that will help define future upper-limb prosthetic research The original intent of this grant was to focus on an improved design of an electric prosthesis only in response to a tremendous number of telephone calls and remarks recorded in a one-page survey from body-powered prosthetic users, additional goals have been included that will address (1) the identified shortcomings of body-powered and electric prostheses and (2) the essential functions that users of bodv-powered and electric prostheses identify as being necessary in the design of a better upper-limb prosthesis.
Permalink
https://hdl.handle.net/10161/4835
Citation
From "MEC 93," Proceedings of the 1993 MyoElectric Controls/Powered Prosthetics Symposium Fredericton, New Brunswick, Canada: August, 1993. Copyright University of New Brunswick.
Collections
More Info
Show full item record