How Are The Motor Units Controlled To Regulate Force? A personal perspective of a three decade long search. 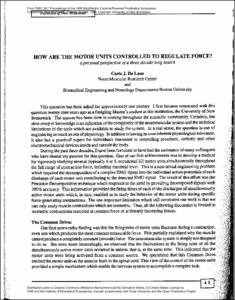 View / Download
431.5 Kb
Date
Author
De Luca, Carlo J.
Repository Usage Stats
383
views
149
downloads
Abstract
This question has been asked for approximately one cennuy. I first became concerned with this question twenty nine years ago as a fledgling Master's student at this institution, the University of New Brunswick, The answer has been slow in corning duoughout the scientific community. Certainly, the slow creep of knowledge is an indication of the complexity of the neuromuscular system and the technical limitations of the tools which are available to study the system. In a real sense, the question is one of engineering as much as one of physiology. In addition to having its own inherent physiological relevance, it also has a practical aspect for individuals interested in controlling prosthetic, orthotic and other electromechanical devices inside and outside the body. During the past three decades, I have been fortunate to have had the assistance of many colleagues who have shared my passion for this question. One of our first achievements was to develop a method for rigorously studying several (typically 4 or 5, occasional 10) motor units simultaneously throughout the full range of contraction force, including maximal level This is a non-trivial engineering problem which required the decomposition of a complex EMG signal into the individual action potentials of each discharge of each motor unit contributing to the detected EMG signal. The result of this effort was the Precision Decomposition technique which responds to the need by providing decomposed signals with 100% accuracy, This information provided the firing times of each of the discharges of simultaneously active motor units which, in turn, enabled us to study the 'behavior of the motor units during specific force-generating contractions. The one important limitation which still constrains our work is that we can only study muscle contractions which are isometric . Thus, all the following discussion is limited to isometric contactions executed at constant force or at linearly increasing forces.
Permalink
https://hdl.handle.net/10161/4867
Citation
From "MEC 95," Proceedings of the 1995 MyoElectric Controls/Powered Prosthetics Symposium Fredericton, New Brunswick, Canada: August, 1995. Copyright University of New Brunswick.
Collections
More Info
Show full item record