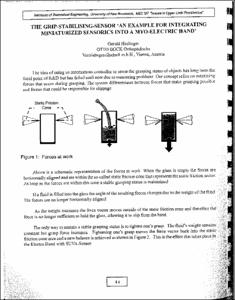 View / Download
127.1 Kb
Date
Author
Haslinger, Gerald
Repository Usage Stats
318
views
357
downloads
Abstract
The idea of using an autonomous controller to sense the gtasping status of objects has long been the focal point of R&D but has failed until now due to measuring problems. Our concept relies on measuring forces that occur during grasping The system differentiates between forces that make grasping possible and forces that could be responsible for slippage.
Permalink
https://hdl.handle.net/10161/4898
Citation
From "MEC 97," Proceedings of the 1997 MyoElectric Controls/Powered Prosthetics Symposium Fredericton, New Brunswick, Canada: August, 1997. Copyright University of New Brunswick.
Collections
More Info
Show full item record