A Poetics of Globalism: Fernando Vallejo, the Colombian Urban Novel, and the Generation of `72 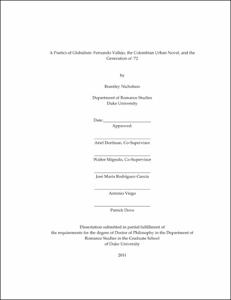 This thesis explores the confluence and clashes between local and global cultural flows in Latin America through the multiple literary movements and tendencies for which the Colombian author, Fernando Vallejo, acts as a unifying agent. My analysis pulls from Decolonial, Aesthetic and World Literary theories, in order to analyze how cosmopolitanism and globalization resonate in contemporary Latin American letters through a survey of three geocultural categories: the Colombian local, the Latin American regional, and the literary global. My analysis of the local tracks the formal evolution of the Colombian Novela de la Violencia into the contemporary Novela Urbana and the parallel political challenge to the conventional Lettered City in Colombia after the Violencia. In terms of the regional, I critique the idea of a positive and universally stabilizing cosmopolitanism through a collective analysis of a generation of Latin American writers that were forced to travel to the cosmopolitan center through exile rather than as an act of freewill, a generation that I refer to in this project as the Generation of '72. And my evaluation of the global considers how a singular World Literary aesthetics and political economy of prestige weights negatively on contemporary Latin American authors. Through a survey of the roughly fifty novels and short stories that fall under the purview of both the Colombian Urban Novel and the Generation of `72, I conclude that aesthetic borders - the places where multiple forms of perception converge- open up spaces and forums of critique of rigid cultural models and century old aesthetic formulae, a tendency that I refer to as a poetics of globalism.