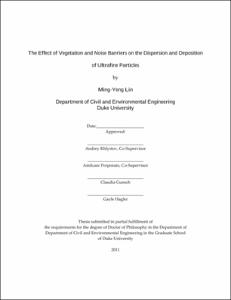 Ultrafine particles (UFP) emitted by traffic have been associated with health risks for people living and working near major roadways. Studies have shown that people living in near-roadway communities experience higher risk of aggravated asthma, respiratory diseases and even childhood leukemia. Sharp concentration gradients of UFP have been reported near major highways with the concentration decreasing rapidly away from the road. Dispersion of UFP downwind of a road depends on many parameters, such as the atmospheric stability and wind speed. Presence of different structures such as noise barriers and vegetation can greatly influence the dispersion and downwind concentrations of UFP. These structures can block the traffic emissions and increase vertical mixing. In addition, vegetation can reduce UFP by deposition processes. Two sets of experiments were conducted in this thesis to investigate the effect of barriers on UFP deposition and dispersion.

The first set of experiments was performed in a wind tunnel facility to address UFP deposition to vegetation barriers solely. Two analytical models were proposed to characterize UFP dry deposition to vegetation measured during the wind tunnel experiment. The first model was derived from the filtration theory to explain UFP dry deposition to pine and juniper branches. The model agrees well with the experimental data indicating that pine and juniper branches can be treated as fibrous filters. The fiber diameters of pine derived from the experimental data were also similar to the physical diameters of pine needles; thus, providing further evidence that vegetation can be regarded as fibers. The second model was derived from the continuity equation and can predict the branch-scale dry deposition of UFP using conventional canopy properties such as the drag coefficient and leaf area density. Both models agree with the measurement results to within 20%.

The second set of experiments was done in three near-roadway environments to investigate the effects of barriers on the dispersion and dry deposition of UFP. We used mobile and stationary measurements to obtain the spatial and temporal variability of UFP. Both mobile and stationary measurements indicated that vegetation and noise barriers can reduce downwind UFP concentrations through dispersion and dry deposition by 20-60 %.

In conclusion, the effect of barriers on UFP dispersion and deposition has been characterized in this thesis. Two analytical models were also proposed from the wind tunnel experiments to characterize dry deposition and agreed well with the measurement results. The analytical model could benefit future climate and air quality models.