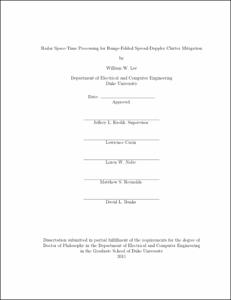 Pulsed radars have an ambiguous relationship between range and velocity which is proportional to the pulse repetition frequency (PRF), leading to potential tradeoffs. High PRFs are necessary to avoid velocity aliasing but suffer at the expense of unambiguous range. Obscuration due to ambiguous range foldover from distant clutter echos seriously degrades target detectability. For the case of skywave HF over-the-horizon (OTH) radar, ionospheric motion causes spreading of surface clutter in Doppler space and coupled with range folded clutter, introduces the effect of so-called 'separated' spread Doppler clutter (SDC). Selection of a nonrecurrent waveform (NRWF) with a quadratic phase interpulse code has been shown to mitigate long-range SDC by folding the multi-hop returns into known disassociated Doppler regions.

Utilizing multiple receive elements, spatial processing can be preformed to exploit the correlation between spatial frequency and Doppler shift produced by ionospheric winds. Adaptive beamforming is known to provide asymptotically optimal array gain if sufficient training data is available. In highly nonstationary environments however, obtaining this asymptotic performance is difficult as neither knowledge of the target wavefront nor signal-free training data is easily obtainable for training. A blind adaptive spatial processing (BASP) technique has been proposed, combining minimum variance (MV) adaptive beamforming and blind source separation (BSS). The unique idea of BASP is the formulation of a signal-free covariance matrix from BSS clutter and noise components at a single range bin, and utilizing it in adaptive beamforming to suppress clutter.

This research explores a clutter mitigation method that will combine NRWF and BASP in order to recover targets masked by Doppler-spread surface backscatter from points beyond the radar's maximum unambiguous range while maintaining target detectability elsewhere in Doppler. Current methods for mitigating range-folded clutter, such as reducing the pulse-repetition frequency or the use of non-recurrent waveforms, suffer loss in the usable Doppler space available for target detection or a reduction in target revisit rate. The proposed research uses BSS methods to exploit the known Doppler separation afforded by NRWF in order to estimate the spatial wavefront of the clutter across a linear receive array. Spatial adaptive processing using this estimated wavefront is then used to suppress range-folded clutter at each range bin without sacrificing the radar timeline or usable Doppler space.

Simulation is conducted to understand the NRWF and its ability to separate range-folded clutter in Doppler. The BASP method is applied to the NRWF and its results demonstrate performance improvement in terms of achievable signal-to-clutter and noise ratio gain. Laboratory experimental results show the NRWF's ability to separate range-folded clutter into designed Doppler regions. BASP is then applied and demonstrated to mitigate the separated range folded clutter and recover usable Doppler space.