Montesquieu, Liberalism and the Critique of Political Universalism 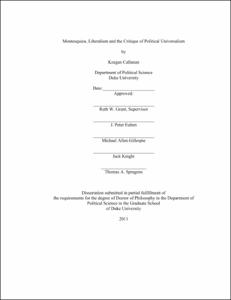 In this dissertation, I advance a new interpretation of Montesquieu's Spirit of the Laws. I argue that his liberal constitutionalism and his political anti-universalism are theoretically harmonious and mutually reinforcing elements of his political philosophy. But because Montesquieu's thought is a species of the genus known as liberal theory, this interpretation of his thought also advances a theoretical and normative thesis: Liberal theory is not inherently or necessarily allied with projects of political universalism but rather possesses in-built resources for critiquing, educating and even resisting such projects. The dissertation makes this case through a critical analysis of Montesquieu's Spirit of the Laws, its sources and its legacy. The unity of Montesquieu's political philosophy becomes evident as we consider the ancient and modern intellectual influences and rhetorical purposes of his political particularism; his regime-pluralist understanding of political freedom and moderation; his account of liberal political culture; his treatment of political and social change; and the legacy of his liberal particularism in the work of Rousseau, Burke, Constant and Mill. As I suggest, this study represents a contribution to contemporary debates concerning liberal democracy's global career and a challenge to common understandings of the essential character of modern liberalism.