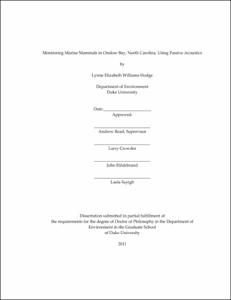 Passive acoustic monitoring is being used more frequently to examine the occurrence, distribution, and habitat use of cetaceans. Long-term recordings from passive acoustic recorders allow the examination of diel, seasonal, and inter-annual variation in the occurrence of vocalizing marine mammals. With the increased use of passive acoustics as a tool for studying marine mammals, the ability to classify calls to the species level is becoming more important. While studies have found distinctive vocalizations in some cetacean species, further work is required in order to differentiate the vocalizations of delphinid species. I sought to classify odontocete vocalizations to species and to describe temporal variation and depth-related differences in the occurrence of cetacean vocal events detected in archival passive acoustic recordings in Onslow Bay, North Carolina. To determine if odontocete species in offshore waters of North Carolina could be distinguished by their whistles and clicks, I used a towed hydrophone array to make acoustic recordings of species encountered during concurrent visual and acoustic surveys between 2007 and 2010. I recorded whistles from four species (Atlantic spotted dolphins, bottlenose dolphins, rough-toothed dolphins, and short-finned pilot whales) and clicks from five species (Risso's dolphins in addition to the four species listed above). After running a classification and regression tree (CART) analysis on 22 measured variables from the contours of four species' whistles, I generated an optimal classification tree that had a correct classification rate of 74.2%. My results indicate that species-specificity exists in the four species' whistles. My examination of the spectral structure of clicks showed that only Risso's dolphins produced clicks with distinctive spectral banding patterns, although I found that other click parameters, particularly peak and center frequency, might be useful in differentiating the other species. I then used the distinctive banding pattern that I observed in Risso's dolphin clicks to identify this species in recordings made by archival passive acoustic recorders that were deployed at various times and locations between 2007 and 2010. I used these recordings to determine how vocal events varied temporally and spatially in Onslow Bay. My analysis of vocal events observed in these recordings showed that Risso's dolphins, sperm whales, and other delphinids are present in Onslow Bay throughout the year; Kogia spp. occur sporadically; and fin and minke whales produce calls that can be detected only between late fall and early spring. I also detected low-frequency downsweeps and two types of low-frequency pulse trains produced by unknown species. After looking at the occurrence of fin whale 20-Hz pulses in relation to downsweeps, I suggest that the downsweeps are produced by sei whales due to the lack of overlap in occurrence. When I looked for diel patterns in the odontocete vocal events, I found a nocturnal increase in the occurrence of clicks from Risso's dolphins and sperm whales, but no diel variation in Kogia clicks. I also found that unidentified delphinids showed either an increase in click events at dawn or at night, depending on the time of year and recording location. Finally, my analysis of acoustic data from five recorders deployed in three different depth ranges revealed that there was greater unidentified delphinid and sperm whale vocal activity on recorders located in deep waters, suggesting a greater diversity and density of animals in deeper waters of Onslow Bay. Together, the results of my dissertation demonstrate the value of passive acoustic monitoring in understanding the distribution and temporal trends in cetacean occurrence, and highlight the importance of classifying sounds to the species level in order to better understand the temporal and spatial patterns found.