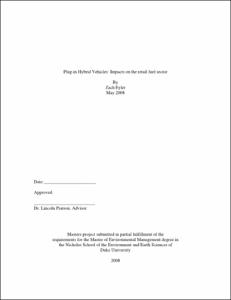 View / Download
264.9 Kb
Date
Author
Eyler, Zach
Advisor
Pratson, Lincoln F
Repository Usage Stats
681
views
1,798
downloads
Abstract
Currently, several automakers are planning the introduction of plug-in hybrid vehicles (PHEVs) to the U.S. market with estimated arrival around 2010. PHEVs operate using a combination of gasoline and batteries and allow drivers the ability to re-charge their vehicles at a home. This change in fueling behavior would decrease the amount of petroleum fuel needed for transportation with any impact first being felt at the point where the fuel is actually dispensed: the gasoline station. This Masters Project aimed to determine effects on gasoline stations from a decrease in petroleum demand due to PHEVs. An economic snapshot of the retail fuel sector was created to determine the state of the industry and determine any trends in the sector. In addition, a financial snapshot of gasoline stations was derived using past data to determine revenue streams, both fuel and non-fuel, and the associated profit margins with those revenues. Four future market penetration scenarios for PHEVs (No, Low, Medium, High) were created and analyzed for future fuel demand using the VISION model. The resulting fuel consumption was applied to gasoline stations to determine any revenue impacts. The results indicated that gasoline stations derive the majority of their revenue from fuel sales, and have been increasing over time. In contrast, non-fuel revenue has actually decreased slightly over time. In terms of profits, gasoline stations derive the majority of their earnings from non-fuel revenue compared to fuel revenue due to much higher average gross margins. The VISION model predicted large impacts to gasoline stations, with PHEVs lowering fuel demand and the associated fuel revenue generated. Due to their historical relationship, non-fuel revenue at gasoline stations was actually predicted to increase as the fuel consumed decreased. For a sector that is already undergoing a significant amount of change and struggling to make profits, PHEVs offer a potential destabilizing threat unless retailers find ways to increase margins and adapt to new vehicle technologies.
Type
Master's project
Department
Nicholas School of the Environment and Earth Sciences
Subject
plug-in hybrid
gasoline
PHEV
retail fuel
gasoline station
petroleum
Permalink
https://hdl.handle.net/10161/499
Citation
Eyler, Zach (2008). Plug-in Hybrid Vehicles: Impacts on the retail fuel sector. Master's project, Duke University. Retrieved from https://hdl.handle.net/10161/499.
Collections
More Info
Show full item record