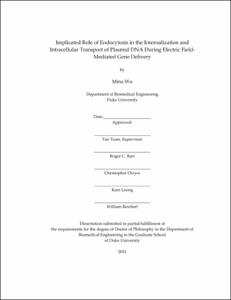 Electric field mediated gene delivery (EFMGD) or electrotransfection is a popular, non-viral gene delivery method that has been used in a variety of studies and applications ranging from basic cell biology research to clinical gene therapy. Yet, the mechanism(s) by which electrotransfection facilitates DNA delivery across the cell membrane into the cell and its subsequent intracellular transport across the cytosolic space towards the nucleus have been insufficiently studied and still remain controversial. Understanding these mechanisms and characterizing the intracellular journey of pDNA is important for understanding the physiological barriers of EFMGD within the cell, which can be used to engineer better solutions to overcome these barriers with the ultimate goal of improving the transfection efficiency of this technology.

Conventional thought in the field assumes that such transport modes as diffusion, electrophoresis, and electro-osmosis, which govern the entry of small molecules into cells through electric field-generated transient membrane pores, also apply to electric field-mediated delivery of therapeutic DNA. We propose that electrically-induced gene transfer into cells is governed by an alternative, more active mode of transport that entails the involvement of cellular endocytic processes. It is our hypothesis that pulsed electric field generate these membrane pores which interact with nearby DNA molecules; but that actual DNA translocation across the membrane is driven by endocytosis, which consequently, then, also plays a role in the intracellular transport of the DNA. To this end, we first investigated the dependence of electrotransfection efficiency (eTE) on binding of plasmid DNA (pDNA) to plasma membrane. Binding concentrates DNA molecules in the vicinity of the cell membrane, which should theoretically result in a greater number of DNA-membrane interactions during pulsed electric field, more internalized DNA, and ultimately, higher eTE values. We demonstrated that supplementing the electrotransfection buffer with divalent cations (Ca2+ and Mg2+) is an effective method of promoting pDNA adsorption to the cell membrane. This cation-mediated increase in DNA adsorption to the cellular membrane resulted in a consequent increase in eTE, up to a certain threshold concentration for each cation. To determine the timeframe for completion of pDNA internalization following pulse treatment, trypsin treatment was applied to cells at different timepoints after electrotransfection to strip off any residual, membrane-bound pDNA that had not been internalized. Trypsin treatment at 10 min post electrotransfection still resulted in a significant reduction in eTE, indicating that the time period for complete cellular uptake far exceeded the lifetime (~ 10 msec) of electric field-induced transient pores. The role of endocytosis was further probed by noting the effect on eTE when cells were treated with three endocytic inhibitors (chlorpromazine, genistein, dynasore) targeting different internalization mechanisms or silenced of dynamin expression using specific, small interfering RNA (siRNA). siRNA silencing and all three pharmacological inhibitors yielded substantial and statistically significant reductions in the eTE. Taken together, these findings suggest that the mechanism of electric-field mediated DNA internalization entails: (i) binding of pDNA to cell membrane and (ii) endocytosis of membrane-bound pDNA.

The same strategies of pharmacological endocytic inhibition and siRNA silencing was used to further explore and compare electric field-induced pDNA internalization in additional cell lines that differ in terms of cell type, proliferation rates, proliferative capacity (i.e. primary versus immortalized/cancer line), etc. in order to determine whether endocytosis is a universally implicated mechanism across many cell lines. Results showed different endocytic pathways to be recruited for pDNA uptake in a cell-dependent manner and that one or multiple pathways may contribute to uptake within a cell line.

Taken together, the studies presented in this dissertation provide both indirect and direct evidence suggesting an endocytic role in the translocation of pDNA across the cell membrane and its intracellular routing towards the nucleus for EFMGD. These seminal findings could potentially lead to better understanding of the intracellular barriers encountered by EFMGD, more strategic optimization of electrotransfection parameters than the trial-and-error approach currently used, and enhanced transfection efficiencies.