A Transnational Bohemia: Dandyism and the Dance in the Futurist Art of Gino Severini, 1909-1914 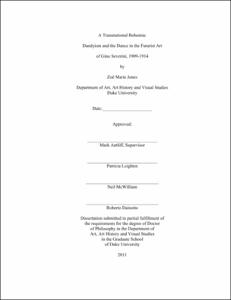 My dissertation studies the intersection of popular entertainment and the visual arts in Paris during the first decades of the twentieth century and the dialogue that formed between this subculture and the avant-garde factions of Paris and Italy. While this project will focus on the Italian Futurist Gino Severini (1883-1966), it is not conceived of as a monograph. Instead I will use Severini as a case study to help make sense of a complicated world in which the boundaries between bohemia and the bourgeoisie, masculinity and femininity, and art and popular culture are transgressed and blurred. Severini is particularly well suited to this discussion because nearly all of the 170 paintings, sketches, and pastels that he produced between the time that he arrived in Paris and the outbreak of the First World War take as their subject a prime example of Parisian popular culture--Montmartre's dance-halls. My study will address how form and content interrelate in these works, analyzing the ongoing evolution of his style and the manner in which he developed his imagery to cater to both commercial and avant-garde audiences. It will also seek to make sense of the reception of Severini's work both in France and elsewhere. In order to make sense of his artistic career and to divine the importance of his life and work to the greater political and cultural environment of early twentieth-century Europe, I will also explore Severini's actual participation in dance-hall culture, his self-fashioning as a dandy and a foreigner, and his attempt to find a niche for himself in Paris while still maintaining a foothold in the Italian avant-garde. Gino Severini's unique posturing within the culture of Bohemian Paris and the rich visual record that he left behind provide a perfect platform from which to deepen our understanding of the multitude of factors influencing the Parisian avant-garde and its subsequent impact on avant-gardes throughout the rest of the Western world.