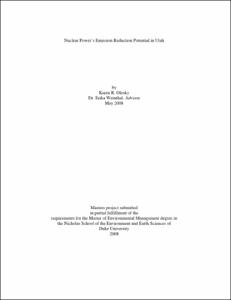 View / Download
521.2 Kb
Date
Author
Olesky, Karen
Advisor
Weinthal, Erika S
Repository Usage Stats
726
views
2,125
downloads
Abstract
In 2007 Utah signed onto the Western Climate Initiative (WCI), pledging to meet an aggregate GHG emission reduction goal of 15% below 2005 levels by the year 2020. This coincided with the release of the Blue Ribbon Advisory Council on Climate Change’s Final Report, which identified 72 different options Utah could potentially undergo to reduce state-wide emissions. These potential mitigation actions where analyzed focusing on Utah specific costs, feasibility, and emissions reduction potential, with the outcome of turning those options into viable State policies sorted by priority and costs. One such policy option was the possibility of building the State’s first commercial nuclear power plant. Four separate categories encompassing Utah’s history with nuclear and general U.S. nuclear capabilities were researched before a recommendation was made. First were the political issues including Utah citizens’ past experiences with nuclear bomb fallout, the near avoidance of storing nuclear waste on an in-state Indian reservation, the development of a permanent nuclear waste storage in Nevada and the Nuclear Regulatory Commission’s permitting and licensing scheme for new nuclear plants. The next category analyzed was the economical costs and benefits building a nuclear plant would impose on Utah. The third category and the one most in support of continuing nuclear power plant construction in the U.S. was recent technological progress. This section detailed new plant designs, as well as highlighting advanced plant safety features and shorter construction timelines. The last and possibly most important category was assessing whether Utah’s environment is able to sustain a nuclear plant’s intense water demands throughout its lifetime. After a Utah specific assessment it seems that if a utility can get past the political opposition, the other three sectors combined allow for the feasibility of building a commercial nuclear power plant. Unfortunately it would not be completed in time to impact emissions levels before the WCI deadline. Therefore while the policy recommendation states that building a nuclear power plant in Utah would be beneficial for GHG emission reductions, only if the WCI enforces a second goal past 2020, would building a nuclear plant aid in the mitigation goals.
Type
Master's project
Department
Nicholas School of the Environment and Earth Sciences
Subject
Nuclear Power
Utah
Western Climate Initiative
Permalink
https://hdl.handle.net/10161/500
Citation
Olesky, Karen (2008). Nuclear Power's Emission Reduction Potential in Utah. Master's project, Duke University. Retrieved from https://hdl.handle.net/10161/500.
Collections
More Info
Show full item record