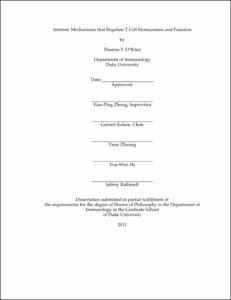 The unique functional attributes possessed by T cells are initiated after stimulation via their T cell receptor (TCR). Due to the T cell's integral role in immune function, the regulation of signaling events downstream of the TCR have been, and continue to be, an area of intense research. An effective T cell immune response is dependent upon the proper relaying of the signals initiated by the TCR-antigen-MHC interaction, whereas a disruption in the signaling cascades downstream of the TCR can result in the inability to control pathogen replication or the initiation of T cell mediated autoimmunity. The discovery of specific pharmacological inhibitors and the generation of genetically modified mouse models have allowed investigators to take a stepwise approach in understanding TCR induced signaling hierarchies.

In this study, we have utilized genetically modified mouse models, in which the targets of gene deletion, TSC1 and DGK, are molecules that regulate signals emanating from the TCR. Additionally, we have demonstrated that both of these molecules negatively regulate the mammalian target of rapamycin (mTOR) in both naïve and activated T cells. mTOR is a critical regulator of cell growth and metabolism. By virtue of its kinase ability, mTOR has been shown to initiate signaling in response to a variety of extracellular signals including cytokines, growth factors, amino acids, and toll-like receptor (TLR) ligands. The versatility with which this protein kinase interprets multiple signaling inputs simultaneously has led to mTOR being referred to as the "rheostat" of the cell. Recent investigation has begun to elucidate the role of the mTOR pathway in basic T cell biology, however, the mechanisms by which mTOR controls basic T cell homeostasis and function is unclear, and the importance of tight control of the TSC-mTOR pathway in T cells is not known.

In the first model, mice were strategically bred so that TSC1 was deleted exclusively in the murine T cell lineage. TSC1, in complex with TSC2, acts as an inhibitor of mTOR by inhibiting Rheb, an activator of mTORC1. Using this model we found that deletion of TSC1 at the double-positive (DP) stage of thymocyte development has several profound effects on T cell signaling, homeostasis and survival. Specifically, the loss TSC1 in T cells results in constitutive activation of mTORC1 and decreased activation of mTORC2. Reduced T cell numbers were also observed in the peripheral lymphoid organs, which correlated with the finding of increased cell death ex vivo as well as after TCR stimulation in vitro. Furthermore, we found that TSC1 deficiency resulted in altered mitochondrial homeostasis and function, which could be rescued in vitro with co-stimulation and/or antioxidants. These observations give us clear evidence that the TSC-mTOR pathway regulates T cell survival and normal mitochondrial homeostasis.

In the second model, I utilized diacylglycerol kinase (DGK) deficient mice in our examination of the mechanisms by which the TCR affects T cell biology. To date, ten DGK isoforms have been identified in mammals, with DGK&#945; and DGK&#950; being expressed in T cells. Immediately following TCR stimulation, PIP2 is hydrolyzed into the secondary messengers inostitol triphosphate (IP3) and diacylglycerol (DAG). By converting DAG into phosphatidic acid, DGKs effectively terminate signaling mediated by DAG and serve to dampen T cell activation. Additionally, previous work from our lab has shown that mTOR kinase activity is negatively regulated in T cells by DGKs, and reveals a novel signaling relationship between the TCR, DGKs, and mTOR kinase activation. Given the ability of DGK&#945; and &#950; to regulate mTOR and other signaling cascades, we hypothesized that DGK activity may play an important role during an anti-viral immune response. Using DGK&#945;- and DGK&#950;-deficient (germline) mice in conjunction with MHC class I restricted tetramers and synthetically generated viral antigens, we were able to enumerate the primary and memory CD8+ anti-viral immune response in the absence of diacylglycerol (DAG) metabolism and enhanced mTOR activity. In response to LCMV infection, DGK-deficient CD8+ T cells expand more aggressively and produce elevated amounts of anti-viral cytokines, which results in reduced viral titers in DGK-deficient mice 7 days after infection. Additionally, we found that while DGK activity serves to suppress the CD8+ T cell response during the primary infection phase, it promotes the expansion of antigen specific CD8+ T cells during the memory phase of an immune response. The diminished response by DGK-deficient memory CD8+ T cells highlights opposing roles for DAG metabolism during the primary and memory immune phases.

The studies reported in this dissertation provide novel insights into the intrinsic mechanisms that regulate T cell homeostasis and function.