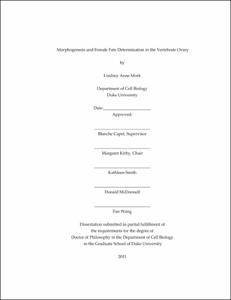 A unique feature of the fetal gonad is its ability to form two distinct organs, the testis and the ovary, from a single bipotential primordium. The outcome of this decision, which is made by a population of somatic cells known as the bipotential supporting cell precursors, determines whether an embryo will develop as a phenotypic male or female. Though several molecular pathways have been shown to be required for female fate determination in vertebrates, the intricacies of ovarian morphogenesis are not well understood. A key event in ovarian development occurs around birth, when meiotic germ cells and somatic granulosa cells organize into primordial follicles, the structures that generate mature oocytes for ovulation in adult females. We investigated the embryonic origins and proliferative properties of granulosa cells in the fetal mouse ovary and found that the precursors emerge from the ovarian surface epithelium and then enter mitotic arrest in a specification process that extends from the bipotential stage to the end of the postnatal follicle assembly period. Maintenance of cell cycle arrest in granulosa cell precursors appears to be regulated by Wnt signaling. The first granulosa cells to be specified were exclusively incorporated into the subset of follicles that begin to grow immediately upon assembly. We show that this first group of granulosa progenitors derives from the supporting cell precursors present in the bipotential gonad. Interestingly, both XX and XY supporting cell precursors were mitotically arrested towards the end of the bipotential period, indicating that adoption of supporting cell fate might be regulated by the cell cycle. We also show that antagonism of Notch signaling may be required for these precursor cells to exit the cell cycle and differentiate.

In Witschi's classic model of vertebrate gonad development, the cortex and medulla of the undifferentiated gonad expand and differentiate in a mutually exclusive manner to yield the mature ovary and testis (Witschi 1951). Estrogen acts on both the cortex and medulla to promote female fate determination and ovary development in non-mammalian vertebrates. However, the downstream receptors and targets through which estrogen exerts its effects on the gonad have not yet been elucidated. We selected the red-eared slider turtle Trachemys scripta as a model with which to address this question. We first characterized the cellular composition of the turtle gonad before and after sex determination, identifying four populations of somatic cells distinguishable by their location within the gonad as well as the complement of transcription factors expressed. This information was then applied to an investigation of estrogen signaling pathways in the turtle ovary. We show that i) estrogen likely acts through its canonical receptors rather than a non-canonical pathway involving ERK signaling; ii) early exposure to estrogen resulted in the premature downregulation of a testis-specific gene, SOX9, in the medulla; iii) less estrogen is needed to promote ovarian differentiation in the cortex of the gonad than to repress testicular differentiation of the medulla, consistent with the localized production of estrogen in the medulla; and iv) estrogen's repressive effect on SOX9 expression may be mediated by Wnt signaling.

Our findings add complexity to the standard model of how the male and female supporting cell lineages are established in mice, reveal evolutionary conservation between mice and turtles in the timing of granulosa cell specification relative to sex determination., and refine our understanding of how estrogen acts to promote ovarian development in non-mammalian species.