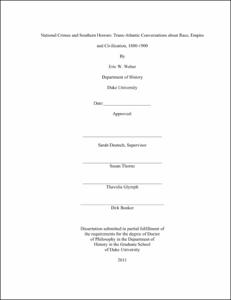 National Crimes and Southern Horrors examines the contested meanings of the terms civilization, race, and empire in trans-Atlantic conversations during the last two decades of the nineteenth century. It argues that understanding these dialogues requires us to understand the interplay between regional and transnational definitions of these terms. It further explains both white Southern opposition to empire at the end of the nineteenth century as well as white Southern acceptance of their region as similar to European empires and imperial mission described in Rudyard Kipling's poem, "The White Man's Burden." Reading newspaper US and British articles and editorials, international periodicals, personal papers of activists and politicians in both the US South and Britain, it uncovers the dynamic definitions of race, empire, and civilization at play in the work of constructing the US South as both a part of and distinct from the imperial world. Reading conversations about Irish home rule, the gold standard, international bimetallism, British interactions with white and black Southerners, the disfranchisement of black men in the US South, the construction of Jim Crow, lynching in the US South, Turkish atrocities in Armenia, the Philippine American War and the Boer War, it reveals that to understand the transnational development of white supremacy in imperial sites in Africa, Asia, the West Indies, and the US South requires to look not only at the ways whites within each site defined their right to rule but also in the ways they looked to each other. It also argues that understanding the place of the US South within trans-Atlantic conversations about race and civilization but also regional politics and the ways that regional concerns structured and limited how people in Britain and the US South saw each other. Through comparison and conflict, the US South was an essential part in constructing global color lines, and imperial ideologies worked to prop up white Southern defenses for segregation and Jim Crow.