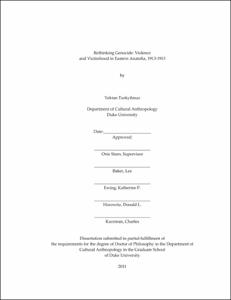 This dissertation examines the conflict in Eastern Anatolia in the early 20th century and the memory politics around it. It shows how discourses of victimhood have been engines of grievance that power the politics of fear, hatred and competing, exclusionary claims to statehood and territory by Turks, Armenians, and Kurds. Grounded in extensive archival research in American, British, Turkish, and Armenian historical repositories, I trace how discourses of communal victimhood were generated around the traumatic ordeals in the two decades that preceded the Armenian genocide of 1915-6, carried out by the Young Turk government. The dissertation pays special attention to the nature of political tension and debate among Armenians on the eve of the genocide as well as rethinking the events and later interpretations of the iconic Armenian uprising in the Ottoman city of Van in 1915. The analysis here goes beyond deterministic, escalationist and teleological perspectives on the antecedents of the Armenian genocide; instead, it highlights political agency and enabling structures of the war, offering a new perspective on the tragic violence of Eastern Anatolia in the early 20th century.