A Theory of Urban-Rural Bias: A Dual Dilemma of Political Survival 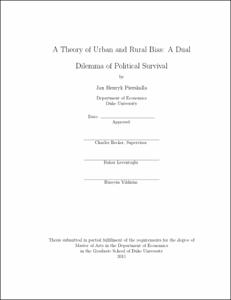 Pro-urban bias in policy is a common phenomenon in many developing countries. Bates (1981) has famously argued the wish to industrialize paired with the political clout of urban residents results in distinctly anti-rural policies in many developing countries. At the same time, empirical reality is much more varied than the standard urban bias argument suggests. Many government have actively supported agricultural producers and rural citizens at early stages of development. Building on Bates' argument, this paper develops a theory that identifies conditions under which politicians will institute pro urban or pro rural policies, by considering the threat of a rural insurgency. Specifically, the direction of urban-rural bias is a function of the asymmetric political threat geographically distinct groups pose to the survival of the central government.