Women in Combat: A Plan to Implement the Repeal of Combat Exclusion Policies 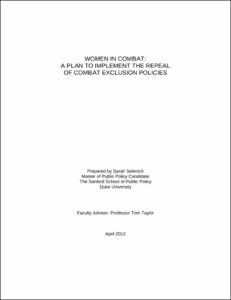 View / Download
510.0 Kb
Date
Author
Selenich, Sarah
Advisor
Taylor, Tom
Repository Usage Stats
989
views
762
downloads
Abstract
“Women in combat” is a controversial issue among members of the military, politicians, and the public. However, on March 7, 2011, the Military Leadership Diversity Commission (MLDC) released a report recommending that DoD eliminate combat exclusion policies for women. The present exclusion policies stem from a 1994 memorandum by then-Secretary of Defense Les Aspin. The memo states, “women shall be excluded from assignment to units below the brigade level whose primary mission is to engage in direct combat on the ground.” It also bars women where privacy costs are prohibitive, units physically collocate with direct ground combat units, units are engaged in long range reconnaissance or Special Forces missions, and physical requirements would exclude most women service members. The Defense Authorization Act for Fiscal Year 1994 requires that the Secretary of Defense notify Congress at least 30 days prior to the implementation of any changes to these policies. The Defense Advisory Committee on Women in the Services (DACOWITS) concurred with the MLDC’s recommendation in its annual report. In addition, On February 9, 2012, in partial-response to the MLDC report, Secretary of Defense Leon Panetta gave notice of the intent to eliminate the co-location portion of the policy and to permit women to serve at the battalion level in military occupational specialties (MOS) already open to them. Yet, neither the MLDC report nor the DACOWITS annual report explains how DoD should implement the elimination of combat exclusion policies for women. Similarly, the February 9th report to Congress outlines few details and indicates that significant research, resources, time and effort are needed. The report concludes, “changes to DoD’s policies will require time to implement fully. There are serious practical barriers, which if not approached in a deliberate manner, could adversely impact the health of our Service members and degrade mission accomplishment.” There are concerns regarding cohesion, good order and discipline, privacy, physical differences between men and women, pregnancy and menstruation, effects on military families, and cultural norms.
Type
Master's project
Department
The Sanford School of Public Policy
Subject
Military Women Combat Exclusion Policies Implementation
Permalink
https://hdl.handle.net/10161/5157
Citation
Selenich, Sarah (2012). Women in Combat: A Plan to Implement the Repeal of Combat Exclusion Policies. Master's project, Duke University. Retrieved from https://hdl.handle.net/10161/5157.
Collections
More Info
Show full item record