Empirical Determinants of Female Genital Cutting: Evidence From The Gambia 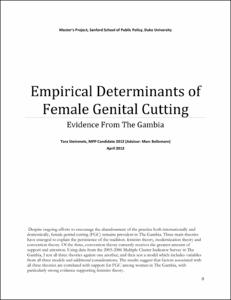 View / Download
708.5 Kb
Date
Author
Steinmetz, Tara
Advisor
Bellemare, Marc
Repository Usage Stats
419
views
2,199
downloads
Abstract
Despite widespread efforts to end the practice of female genital cutting (FGC), the practice persists across much of the world, including The Gambia. In The Gambia, approximately 78 percent of women are circumcised. In some regions the rate is closer to 90 percent. This is concern to the global health and development community because of the myriad negative health, psychological and social consequences theorized to result from the procedure. Others contend that regardless of any of these consequences, female genital cutting is a violation of human rights and should be abandoned on that principle. Regardless the motivations for interest, however, it is important to develop and understanding of why the practice persists in order to try to effectively foment change. Three major theories have emerged to attempt to explain the persistence of FGC, as well as other similar traditions: 1. Feminist theory: Feminist theory predicts that abandonment of FGC will be correlated with increased rights for women, including improved education for women, protection from domestic violence, property rights, and other factors related to the improvement of women’s rights more broadly. 2. Modernization theory: Modernization theory posits that FGC abandonment is correlated with societal modernization, including improved education in society, increased wealth, increased access to modern media, and other indicators linked with modernization. 3. Convention theory: Convention theory contends that practices like FGC will only be abandoned by communities or subgroups, rather than by individuals or households, because of the challenges in being the first to abandon traditional practice and face ostracism or rejection from one’s community. Data This paper uses data from the 2006 Multiple Cluster Indicator Survey (MICS) to test each theory individually and against each other. This survey of approximately ten thousand Gambian women included questions that gathered information on family, household, attitudes toward domestic violence, beliefs about HIV/AIDS, and many other factors. Results The results from this study seem to provide significant support for feminist theory, as well as strong support for convention theory. Modernization theory, however, does not seem to be particularly relevant to explaining the persistence of FGC in The Gambia. Ultimately, any single model may not be adequate to capture the complex set of factors which predict whether or not a Gambian woman will support female genital cutting.
Type
Master's project
Department
The Sanford School of Public Policy
Subject
Africa, Gambia, women, convention, female circumcision, female genital cutting
Permalink
https://hdl.handle.net/10161/5168
Citation
Steinmetz, Tara (2012). Empirical Determinants of Female Genital Cutting: Evidence From The Gambia. Master's project, Duke University. Retrieved from https://hdl.handle.net/10161/5168.
Collections
More Info
Show full item record