Parallels between China the West? Factors that Influence Public Opinion on the Environment in China 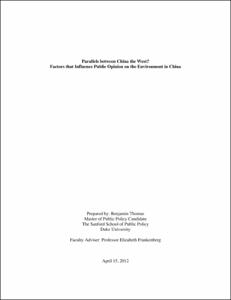 View / Download
319.5 Kb
Date
Author
Thomas, Benjamin
Advisor
Frankenberg, Elizabeth
Repository Usage Stats
815
views
302
downloads
Abstract
RESEARCH QUESTION (page 1) Most research on environmental attitudes centers on developed countries. Given the different circumstances, culture and history of China compared to developed countries, should we expect a similar state of environmental attitudes in China to the state, either currently or historically, in developed countries? Does Chinese public opinion on the environment fit the existing frameworks on environmental attitudes? LITERATURE REVIEW (page 2) Literature on environmental attitudes at the individual level can be clustered into three groups: 1) the “direct effect hypothesis” in which economic factors may trump “luxuries” such as the environment; 2) the “indirect effect hypothesis” in which values determine environmental attitudes (I primarily examine postmaterialism); and 3) theories based on demographic factors such as age, education and gender. METHODOLOGY (page 12) I used the World Values Survey (WVS) data set to explore this research question. I utilized specific questions from the WVS, and in many cases constructed indices, to test the individual components of the above theories. I created three ordinary least squares multiple regression models to test the above hypotheses. The three models tested different combinations of the direct hypothesis, indirect hypothesis, and the demographic based hypotheses. Dependent variables (page 12) A. National environmental concern: the three questions in this index are about concern for water quality, air quality, and sewage and sanitation quality. B. Global environmental concern: the three global questions in this index are about concern for global warming, loss of biodiversity and pollution of the world’s oceans and other large bodies of water. C. Overall environmental concern: this index is based on the global and national concern indices, weighted equally. Independent Variables (page 16) A. Income (Direct Effect Hypothesis) B. Postmaterialism Index (Indirect Effect Hypothesis): this index taps materials values, such as prioritizing the maintenance of order in the country, and postmaterialist values, such as the protection of the freedom of speech. C. Age and age cohort (Demographic Based Hypotheses) D. Education and gender (Demographic Based Hypotheses) E. Coastal provinces (Demographic Based Hypotheses) F. Political party membership (Demographic Based Hypotheses) G. Environmental group membership (Demographic Based Hypotheses) RESULTS (page 21) As predicted by the literature, there is always an age effect for national environmental issues in both countries as well as some cohort effects for national issues. However, there is only sometimes an age effect for global issues and never a cohort effect for global issues. Environmental group membership always has an effect in the United States on concern for all environmental issues. However, environmental group membership only has an effect on national issues in China. The findings for postmaterialism in each country are the opposite of one another. In the United States, the level of postmaterialism doesn’t have an effect on national concern for the environment, but it does have an effect on concern for global issues. In China, postmaterialism has an effect on concern for national issues, but not global issues. Income level has no effect on concern for national environmental issues in both China and the United States. However, there is an effect for global issues in both countries. In China, higher income leads to greater concern for global issues.
Type
Master's project
Department
The Sanford School of Public Policy
Subject
Public opinion China environment national global
Permalink
https://hdl.handle.net/10161/5169
Citation
Thomas, Benjamin (2012). Parallels between China the West? Factors that Influence Public Opinion on the Environment in China. Master's project, Duke University. Retrieved from https://hdl.handle.net/10161/5169.
Collections
More Info
Show full item record