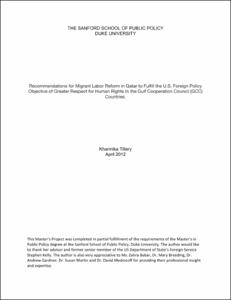 View / Download
463.1 Kb
Date
Author
Tillery, Kharmika
Advisor
Kelly, Stephen
Repository Usage Stats
624
views
780
downloads
Abstract
POLICY QUESTION What types of migrant labor reforms should the United States Department of State propose to Doha, Qatar, a member of the Gulf Cooperation Council (GCC) in order to fulfill the US foreign policy goal to promote greater respect for human rights in the GCC? BACKGROUND The Gulf Cooperation Council is a political and economic union of six countries that border the Persian Gulf. In 1981, the nations of Bahrain, Qatar, Saudi Arabia, the United Arab Emirates (UAE), Oman, and Kuwait formed this regional and collaborative union. These six Arab nations share a common religious and cultural identity similar to that of other nations in the Middle East. They also are all major oil exporters that have experienced fast-paced growth in the labor population, and are heavily reliant on migrant labor. At the beginning of the oil era the majority of migrant laborers came from surrounding Arab nations. The largest group was composed of Yemeni and Egyptian workers looking for better economic opportunities in Saudi Arabia. The Gulf nations were also a destination for Palestinians following the Arab-Israeli war in 1948 and the occupation of Palestine. After the economic boom in 1973, the nations of the Persian Gulf were able to reach levels of development that were unmatched in many other Arab nations. This development resulted in a massive labor migration from Yemen, Egypt, Sudan, Jordan, Palestine, and Syria. The religious, cultural, and linguistic similarities initially made Arab labor more attractive than immigrants from other regions. However, the preference for Arab workers has changed significantly in recent years for many political and social reasons. While the number of Arab laborers has decreased, migrant labor from South and Southeast Asia to the GCC nations has surged. The majority of migrant laborers emigrating to the GCC today are from South and Southeast Asia. Several factors make Asian laborers preferable to Arab laborers. Foreigners are now a significant part of the Gulf States’ population, ranging from 25% in Saudi Arabia to 66% in Kuwait, to over 90% in the UAE and Qatar. In those foreign populations, there are now twice as many Asians as Arabs. All six nations of the GCC receive immigrants from India, Pakistan, the Philippines, and Egypt. Four of them also take laborers from Sri Lanka and Bangladesh. The majority of the top sending countries are South and Southeast Asian countries. PROBLEM Migrant laborers provide important services and support to the nations of the Persian Gulf and have been able to earn more than they would in their native countries. They have also boosted their home economies through substantial remittances. While the existing system seems ideal for both the receiving countries of the GCC and the sending countries, South/Southeast Asia migrant workers are often deceived and exploited by sponsors and recruiters in the receiving and sending countries. Patterns of labor exploitation in the Gulf are characterized by physical and emotional abuse, inadequate wages, poor living conditions, and denial of freedom to travel or change jobs. The recruitment agencies of the sending countries and the GCC’s current labor laws do not favor the workers and have facilitated the continuation of these circumstances. UNITED STATES-QATAR RELATIONS The United States’ friendly relationship with Qatar allows ideas about migrant labor reform to have a platform there. The country’s effort to align itself with the United States can facilitate openness regarding migrant labor reform. CRITERIA The following set of criteria is used to evaluate the viable policy options. • Effectiveness of these measures. • Political feasibility. • Contribute to interests central to U.S. foreign policy. POLICY OPTIONS 1. Abolish the sponsorship system. 2. Create a government agency exclusively for overseeing migrant labor affairs. 3. Use bilateral engagement to reform the recruitment system. 4. Reform the current nationalization processes (GCC nation policy that replaces foreign workers with GCC country citizens). RECOMMENDATION Reform the sponsorship system through liberalization of the current system and reform the recruitment system through bilateral engagement between Qatar and other nations that have large numbers of citizens working in Qatar.
Type
Master's project
Department
The Sanford School of Public Policy
Subject
GCC; Migrant Labor; Qatar; U.S. Foreign Policy; Human Rights
Permalink
https://hdl.handle.net/10161/5192
Citation
Tillery, Kharmika (2012). Recommendations for Migrant Labor Reform in Qatar to Fulfill the U.S. Foreign Policy Objective of Greater Respect for Human Rights In the Gulf Cooperation Council (GCC) Countries. Master's project, Duke University. Retrieved from https://hdl.handle.net/10161/5192.
Collections
More Info
Show full item record