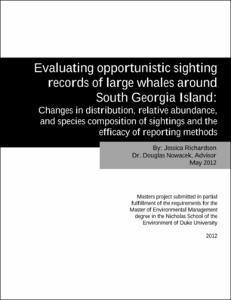 View / Download
5.1 Mb
Date
Author
Richardson, Jessica
Advisor
Nowacek, Doug
Repository Usage Stats
308
views
815
downloads
Abstract
To examine general population trends of large whales in South Georgia waters, two opportunistic data sets of large whale sightings from 1991-2010 around South Georgia were analyzed: the South Georgia Museum log of whale sightings and British Antarctic Survey whale sighting reports from the Bird Island research station. Bird Island abuts the Northwest tip of South Georgia. The four most-reported species for both data sets were southern right whale (Eubalaena australis), humpback whale (Megaptera novaeangliae), minke whale (Balaenoptera acutorostrata), and killer whale (Orcinus orca). These totally independent data sets showed comparable changes in abundance through time, thus despite a lack of sighting effort records, inferences could be made about changes in relative abundance. The number of reported sightings per 5-year period from both data sets increased from the 1991-1995 period through the 2001-2005 period and has since decreased. Species composition of reported sightings has changed over time; southern right whales have become the most sighted species for both data sets with a peak of reported sightings in the 2001-2005 period. Sightings are concentrated around Shag Rocks, at the northwest tip of South Georgia, and along the north/east coastline of South Georgia; sightings in the bays around South Georgia have increased over time. In an area such as the Antarctic with many difficulties associated with conducting research, opportunistic data sources such as these can become invaluable. Although opportunistic data are not ideal, the ability to obtain data that would otherwise be unattainable may make these data sources quite useful. The reporting method for whale sightings at South Georgia was in desperate need of updating and the historical records were underutilized. To remedy this, I created a web form to report sightings linked on an interactive web map that allows users to view sightings of a selected species over a selected date range. The reporting process is now digital, and past sightings can now be viewed interactively by the public. The web map and form have been uploaded to the South Georgia Heritage Trust web site for use. The South Georgia Museum and South Georgia Government web sites have also been asked to include a link to the web map.
Type
Master's project
Department
Nicholas School of the Environment and Earth Sciences
Subject
South Georgia, whales, whaling, Antarctica, Antarctic, whale sightings
Permalink
https://hdl.handle.net/10161/5199
Citation
Richardson, Jessica (2012). Evaluating opportunistic sighting records of large whales around South Georgia Island: Changes in distribution, relative abundance, and species composition of sightings and the efficacy of reporting methods. Master's project, Duke University. Retrieved from https://hdl.handle.net/10161/5199.
Collections
More Info
Show full item record