The Complexity of Self-Ownership in Libertarian Ideology: The Corporate Self 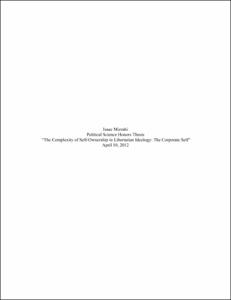 View / Download
250.4 Kb
Date
Author
Mizrahi, Isaac
Repository Usage Stats
1,028
views
596
downloads
Abstract
Libertarianism is often considered a more logically consistent and predictable political stance concerning the role and rights of government. The libertarian movement prides itself on consistently adhering to an ideological creed, creating a party that is interested in principle rather than popularity. Libertarianism in the current American usage refers to an ideology that prefers to organize the world through the decentralized mechanisms of private property, trade, and voluntary cooperation, rather than through government. The central claim of libertarians is fairly simple. Each individual has a right to liberty, that is “the right to do whatever we want with the things we own, provided we respect other people’s rights to do the same” (Sandel 60). At the heart of this ideology is the idea of self-ownership. In the third chapter of Michael J. Sandel’s book, he asks the basic question: “Do we own ourselves?” In answering this question and perusing the ideology of libertarianism, he examines five common objections to the libertarian denial of the merits of wealth redistribution and poses what he believes is the way libertarians would reply to those objections. Although his libertarian responses do not come from his own beliefs, they are based in legitimate rights-based libertarian political philosophy, such as those proposed by Murray N. Rothbard and Robert Nozick. The natural-rights based claim of libertarianism depends on the seemingly valid notion that we own ourselves absolutely. From this, libertarian theorists deduce that we must own our time and labor and any attempt to redistribute any of our labor or wealth by the government, beyond a minimal state, is coercion on par with enslavement. What I offer is a refutation of some of these oversimplified conceptions of ownership by prominent rights-based libertarian theorists. After exposing inherent inconsistencies in the libertarian conception of ownership and how it relates to natural rights, I show how my new conception of ownership, one based on a corporate model of ownership, changes the way the parameters of libertarianism while preserving personal liberty.
Type
Honors thesis
Subject
Libertarianism, Natural Rights, Self-Ownership, Wealth Redistribution, Corporation
Permalink
https://hdl.handle.net/10161/5208
Citation
Mizrahi, Isaac (2012). The Complexity of Self-Ownership in Libertarian Ideology: The Corporate Self. Honors thesis, Duke University. Retrieved from https://hdl.handle.net/10161/5208.
Collections
More Info
Show full item record