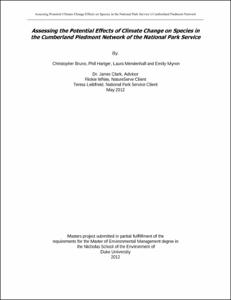 View / Download
9.8 Mb
Date
Authors
Bruno, Christopher
Hartger, Phil
Mendenhall, Laura
Myron, Emily
Advisor
Clark, James S.
Repository Usage Stats
193
views
147
downloads
Abstract
In this study, we evaluate the climate change vulnerability of a subset of key species found in the Cumberland Piedmont Network (CUPN) of the National Park Service (NPS), an ecologically important and diverse region. We developed a list of species of conservation concern (globally and sub-nationally) within each of the fourteen NPS units in the CUPN. Next, we employed NatureServe’s Climate Change Vulnerability Index (CCVI) in order to determine which of those species may be most vulnerable to climate change, based on each species’ 1) direct exposure to climate change, 2) indirect exposure to climate change, 3) sensitivity, and 4) documented/ modeled response to climate change. CCVI results showed a range of vulnerability scores among taxonomic groups, including high vulnerability for mollusks and low vulnerability for migrant songbirds. Furthermore, we found that species of conservation concern were not necessarily those most vulnerable to climate change. Additionally, we modeled the current and projected habitat suitability in 2050 and 2080 for four case study species, three that were assessed by the CCVI to be vulnerable to climate change and one assessed to be presumed stable. We used the software package MaxEnt (chosen modeling method of NatureServe) and the program BIOMOD, which produces habitat suitability estimates using a variety of different algorithms. We combined the results produced by MaxEnt and BIOMOD to create an ensemble projection for each species. This shows areas where all models predict future suitable habitat. Finally, we examined which of the NPS Units within the CUPN were in danger of losing vulnerable species populations under the climate change scenarios we chose. These models predict that key species may disappear from some parks with climate change. This information can be incorporated into regional management and prioritization strategies that increase the long term viability of these species, as well as help NPS land managers better understand which species of conservation concern are likely to be most affected by climate change.
Type
Master's project
Department
Nicholas School of the Environment and Earth Sciences
Subject
Climate Change
Vulnerability
Species Distribution Modeling
Ensemble Projection
National Park Service
Conservation Management
Permalink
https://hdl.handle.net/10161/5259
Citation
Bruno, Christopher; Hartger, Phil; Mendenhall, Laura; & Myron, Emily (2012). Assessing the Potential Effects of Climate Change on Species in the Cumberland Piedmont Network of the National Park Service. Master's project, Duke University. Retrieved from https://hdl.handle.net/10161/5259.
Collections
More Info
Show full item record