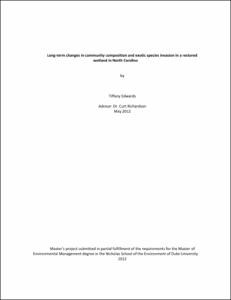 View / Download
1.1 Mb
Date
Author
Edwards, Tiffany Ara
Advisor
Richardson, Curtis J.
Repository Usage Stats
471
views
320
downloads
Abstract
Wetland systems are highly productive and provide an estimated $33 trillion per year in ecosystem services. However, wetland ecosystems are one of the most anthropogenically altered natural systems in the United States, with an estimated 342,700 acres of tidal and freshwater wetlands drained and developed in North Carolina alone. Wetland restoration is a growing industry in the United States, but parameters of restoration success are often poorly defined with few clear baselines available for comparison. One commonly used metric is the persistence of planted vegetation and species diversity. This study surveys a restored wetland in Durham, North Carolina to determine whether the site has successfully maintained robust species diversity seven years after restoration. Particularly, this study investigates whether increased species diversity has successfully resisted invasion by Japanese Stiltgrass (Microstegium vimineum). The first goal was to determine whether plots with higher species diversity had less Microstegium biomass. The second goal was to find what the changes in plant community dynamics have been over time. Then, the current plant community was analyzed by comparing the persistence and abundance of the originally planted species with new species that have invaded subsequent to restoration. The third and final goal was to determine whether edge effects are affecting the community composition. The results indicate that there was no statistically significant difference in Microstegium biomass weights between the four diversity treatments of 0, 1, 4 or 8 planted species. A total of 40 species including Microstegium were found in the plots, including 32 new species, eight of which were invasive species and four were obligate wetland species. A comparison of species importance by plot presence and total biomass indicated that Microstegium was by far the most abundant species at the site, but many originally planted species and new native species have persisted and spread. Edge effects were evident, although not statistically significant, for new non-invasive species. It appears that edge effects are not strongly influencing the spread of Microstegium. This study contains several suggestions for further study and Microstegium management strategies, including the selection of competitive native species, prioritizing active restoration over natural species recruitment, and continued monitoring over time.
Type
Master's project
Department
Nicholas School of the Environment and Earth Sciences
Subject
wetland
Duke SWAMP
Diversity-invasibility hypothesis
invasive species
wetland restoration
Permalink
https://hdl.handle.net/10161/5283
Citation
Edwards, Tiffany Ara (2012). Long-term changes in community composition and exotic species invasion in a restored wetland in North Carolina. Master's project, Duke University. Retrieved from https://hdl.handle.net/10161/5283.
Collections
More Info
Show full item record