The Impact and Cost-Effectiveness of the Missouri Solar Rebate 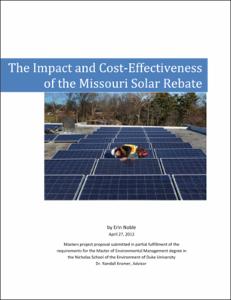 View / Download
581.6 Kb
Date
Author
Noble, Erin
Advisor
Kramer, Randall
Repository Usage Stats
360
views
572
downloads
Abstract
Missouri receives more than 80% of its electricity from coal – more than two times the national average. Nearly all coal burned in Missouri power plants is imported from states such as Wyoming causing a $1.1 billion drain on Missouri’s economy. Historically, Missouri has been slow to expand the use of renewable energy. In 2005, Missouri received less than .01% of its electricity from renewables and ranked 49th in the country on renewable energy usage. In an attempt to increase the in-state development of renewable energy, Missouri advocates worked to pass a renewable electricity standard and solar rebate through a voter enacted initiative in 2008. In its first two years, the Missouri solar rebate created a 3400% increase in the amount of solar photovoltaic (PV) installed in Ameren and Kansas City Power and Light’s service territory. In those utility territories, PV capacity grew from 38 installations totaling 100 kilowatts in 2009 to 474 installs totaling 3500 kilowatts (3.5 megawatts) in 2011. The purpose of this report is to analyze the impact and cost-effectiveness of the Missouri solar rebate. The report also quantifies the clean air and economic benefits of the Missouri solar rebate with the goal of helping citizens and policymakers make informed decisions about the future of solar energy in Missouri.
Type
Master's project
Department
Nicholas School of the Environment and Earth Sciences
Subject
Missouri solar
solar rebate
solar PV
solar incentives
renewable energy standard
Permalink
https://hdl.handle.net/10161/5284
Citation
Noble, Erin (2012). The Impact and Cost-Effectiveness of the Missouri Solar Rebate. Master's project, Duke University. Retrieved from https://hdl.handle.net/10161/5284.
Collections
More Info
Show full item record