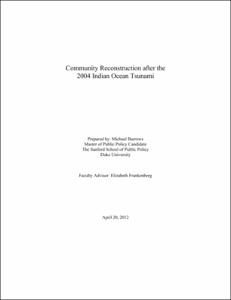 View / Download
262.0 Kb
Date
Author
Burrows, Michael
Advisor
Frankenberg, Elizabeth
Repository Usage Stats
765
views
598
downloads
Abstract
Executive Summary 1 Research Question This paper explores the reconstruction effort in Aceh following the 2004 Indian Ocean Tsunami. The Indonesian government declared that the goal of the recovery would be to ‘build back better’ that is, to take advantage of the attention and funds brought about by the catastrophe in a way that would improve the quality of life for Aceh’s residents. To evaluate whether reconstruction effectively met this expectation, we observe the recovery’s path along three aspects: i. Community investments in transportation and water/sanitation infrastructure ii. Rebuilding of housing stock at the community level iii. Home reconstruction at the household level The existing disaster aid literature provides some suggestive methods of measuring intervention, but there are no established metrics for evaluating overall success or failure of reconstruction projects, much less full post-disaster recovery efforts. While we cannot specifically determine whether or not Aceh’s reconstruction generated more wealth or utility for its residents than was destroyed by the tsunami or could have been generated through other methods, this paper seeks to identify changes in community infrastructure and housing stock that are likely to contribute to individual health and well-being. 2 Background & Context On December 26, 2004 an earthquake measuring 9.3 on the Richter scale occurred in the Indian Ocean, just off the west coast of Sumatra. A massive tsunami resulted, devastating the province of Aceh, one of Indonesia’s least developed regions. The massive rebuilding effort is widely acknowledged to have changed the face of Aceh. Despite the expense and scale of reconstruction, however, there have been few formal efforts to objectively evaluate the recovery in terms of scope and effectiveness. 3 Data and Sample Our data come from the Study of the Tsunami Aftermath and Recovery (STAR). STAR converted a pre-tsunami socioeconomic survey led by Statistics Indonesia (SUSENAS) into a broad-based panel survey. The 409 enumeration areas and 6,184 households described in this paper were first surveyed by SUSENAS in 2004, and by STAR annually thereafter. By exploiting the pre-tsunami baseline and extensively tracking survivors (93% of which were interviewed face-to-face), STAR provides a unique perspective on the tsunami’s effects. 4 Methodology and Results i. Community-level infrastructure investments Beginning with transportation infrastructure, we identify the effect of the tsunami on road and bridge damage in Aceh. We then explore correlates of physical recovery and perceived improvements, again comparing communities in heavy damage areas to those relatively less affected by the tsunami. Turning to water and sanitation, we identify trends in access to protected water sources and modern sanitation methods. ii. Home reconstruction at the community level Using reported occupancy rates, counts of rebuilt homes, and population estimates, we consider changes in overall housing stock as a possible indicator for overbuilding. iii. Home reconstruction at the household level We begin by describing housing quality before the tsunami according to material and construction characteristics, subsequently illustrating how the distribution of these characteristics changed immediately after the tsunami and throughout the recovery. Finally, we explore the possibility of differential aid receipt according to household and community characteristics. 5 Discussion and Conclusions This paper exploits a panel data set uniquely suited to identifying the impact of one of the costliest disasters in human history on the community and household level. Our analyses suggest that at the community level, post-tsunami recovery has triggered a development effort much broader than the reach of the tsunami itself. Particularly in the realm of transportation infrastructure, where most communities report improvements over pre-tsunami roads and bridges, much of Aceh finds itself better off today than in 2004. Income and location appear to be important predictors of improvements in water and sanitation, suggesting areas for improved public intervention. We also identify possible evidence of aid dependency in heavily damaged areas. While analysis does not dismiss the possibility of overbuilding, we generally find that aid agencies accurately replaced the housing destroyed by the tsunami. There is little evidence of differential aid distribution among households experiencing tsunami damage. Although there is some convergence in quality along certain characteristics, it appears that significant differences in overall home quality remain.
Type
Master's project
Department
The Sanford School of Public Policy
Subject
disaster reconstruction aid tsunami indonesia
Permalink
https://hdl.handle.net/10161/5353
Citation
Burrows, Michael (2012). Community Reconstruction after the 2004 Indian Ocean Tsunami. Master's project, Duke University. Retrieved from https://hdl.handle.net/10161/5353.
Collections
More Info
Show full item record