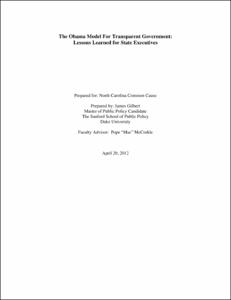 View / Download
376.5 Kb
Date
Author
Gilbert, James
Advisor
McCorkle, Pope
Repository Usage Stats
392
views
357
downloads
Abstract
By almost every conceivable measure, Americans today are less positive and more critical of government. Majorities or pluralities of all demographic groups report high levels of distrust towards government and believe the federal government needs very major reform. A growing amount of literature indicates that transparency can improve governmental decision-making. Participation can also have other important effects on customer satisfaction. Research indicates that use of the Internet to transact with government has a positive impact on citizen trust as well as public perceptions of government responsiveness. Yet skeptics suggest closer examination of the concept and its application is needed. The election of Barack Obama as the 44th President of the United States became associated with the effective use of Internet technologies during his campaign. Then at the beginning of his new administration, President Obama declared that he would work to ensure the public trust and establish a new system of transparency, public participation, and collaboration. This paper compares the promises and performance of the Obama Administration to develop a set of recommendations that Common Cause North Carolina can provide to governors and state cabinet officials on transparency initiatives throughout state executive branch agencies. This research follows a review procedure combining evidence from quantitative and qualitative studies. This paper reviews the government transparency initiatives launched by the Obama Administration that resulted from his two Memoranda on Open Government as well as the recent actions federal agencies have undertaken to make public information more accessible in response to the administration’s Freedom of Information Act Memorandum. This paper also reviews the delivery models and paths for success proposed by scholars as well as other observers and incorporates their views in developing a list of ‘lessons learned’ for states. I recommend that Common Cause propose to state executives the following: 1) States should leverage existing federal infrastructure and national priorities as well as further cultivate state-federal relationships to foster transparency efforts; 2) States should provide data in frameworks that are both useful and citizen-friendly in addition to providing the corresponding underlying data; 3) States should develop new performance and outcome measurement methods to gauge the success of transparency policy initiatives; and 4) States executives should be careful not to overpromise on the outcomes of transparency initiatives.
Type
Master's project
Department
The Sanford School of Public Policy
Permalink
https://hdl.handle.net/10161/5376
Citation
Gilbert, James (2012). The Obama Model For Transparent Government: Lessons Learned for State Executives. Master's project, Duke University. Retrieved from https://hdl.handle.net/10161/5376.
Collections
More Info
Show full item record