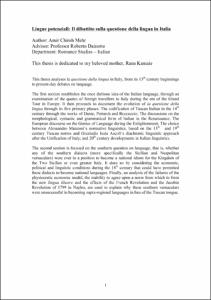 View / Download
323.6 Kb
Date
Author
Mehr, Amir Chireh
Repository Usage Stats
596
views
2,267
downloads
Abstract
This thesis analyses la questione della lingua in Italy, from its 13th century beginnings to present-day debates on language. The first section establishes the once dubious idea of the Italian language, through an examination of the quotes of foreign travellers to Italy during the era of the Grand Tour in Europe. It then proceeds to document the evolution of la questione della lingua through its five primary phases: The codification of Tuscan Italian in the 14th century through the works of Dante, Petrarch and Boccaccio; The discussions on the morphological, syntactic and grammatical form of Italian in the Renaissance; The European discourse on the Genius of Language during the Enlightenment; The choice between Alessandro Manzoni’s normative linguistics, based on the 13th and 19th century Tuscan norms and Graziadio Isaia Ascoli’s diachronic linguistic approach after the Unification of Italy; and 20th century developments in Italian linguistics. The second section is focused on the southern question on language, that is, whether any of the southern dialects (more specifically the Sicilian and Neapolitan vernaculars) were ever in a position to become a national idiom for the Kingdom of the Two Sicilies or even greater Italy. It does so by considering the economic, political and linguistic conditions during the 18th century that could have permitted these dialects to become national languages. Finally, an analysis of the failures of the physiocratic economic model, the inability to agree upon a norm from which to form the new lingua illustre and the effects of the French Revolution and the Jacobin Revolution of 1799 in Naples, are used to explain why these southern vernaculars were unsuccessful in becoming supra-regional languages in lieu of the Tuscan tongue.
Description
Winner of the 2012 James Rolleston Award for best Honours Thesis written in a foreign language
Type
Honors thesis
Department
Romance Studies
Permalink
https://hdl.handle.net/10161/5384
Citation
Mehr, Amir Chireh (2012). Lingue Potenziali: Il dibattito sulla questione della lingua in Italia. Honors thesis, Duke University. Retrieved from https://hdl.handle.net/10161/5384.
Collections
More Info
Show full item record