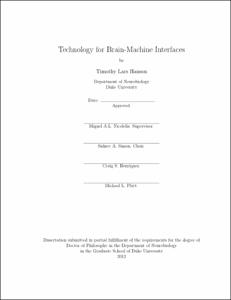 Brain-machine interfaces (BMIs) use recordings from the nervous system to extract volitional and motor parameters for controlling external actuators, such as prosthetics, thereby bypassing or replacing injured tissue. As such, they show enormous promise for restoring mobility, dexterity, or communication in paralyzed patients or amputees. Recent advancements to the BMI paradigm have made the brain -- machine communication channel bidirectional, enabling the prosthetic to inform the user about touch, temperature, strain, or other sensory information; these devices are hence called brain-machine-brain interfaces (BMBIs).

In the first chapter an intraoperative BMI is investigated in human patients undergoing surgery for implantation of a deep brain stimulation (DBS) treatment electrodes. While the BMI was marginally effective, we found high levels of behavioral and tremor tuning among cells recorded from the surgical targets, the subthalamic nucleus (STN) and ventral intermediate nucleus (VIM) of the thalamus. Notably, this tremor or behavior tuning was not mutually exclusive with oscillatory behavior, suggesting that physiological tuning persists even in the face of pathological oscillations. We then used nonlinear means for extracting tremor tuning, and found a significant population, consistent with double-frequency or co-modulation to tremor within the basal ganglia. Synchrony was then assessed over long and short timescales between pairs of neurons, and it was found that tremor tuning implies synchrony: all units exhibiting tremor tuning showed synchrony to at least one other unit.

BMBIs rely on a host of both scientific knowledge and technology for effective function, and this technology is currently in intensive research. In this dissertation two technologies for BMBIs, corresponding to the two directions of communication, are designed, described, and tested. The first one is a high compliance, digitally controlled, high-side current-regulated microstimulator for intracortical microstimulation (ICMS). The device is validated on the bench, tested in monkeys, and used for multiple experimental setups. Due to careful control of parasitic charge injection, the microstimulator is ideally suited for interleaving stimulation and recording as employed in some BMBIs.

The second technology described is a wireless, scalable, 128 channel neural recording system. The device features aggressive digital filtering to maximize signal quality, has spike sorting and compression on the transceiver, can be fully configured over the air through a custom wireless bridge and client software, and can run for over 30 hours on one battery. This system has been tested in a monkey while in its home cage, where the wireless system permitted unfettered, continuous recording and continuous access to a simplified BMI. A full description of the development and device is described, as well as results showing convincing 1D and suggestive 2D BMI control.