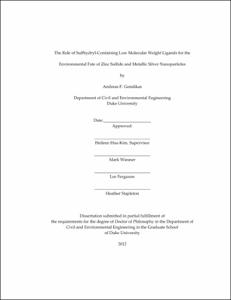 Nanomaterials often exhibit enhanced reactivity relative to their larger colloidal counterparts because of the high specific surface area and number of imperfections on the crystal lattice at the nanoscale. Management of ecosystems, remediation of contaminated waters, and assessment of the potential risks from the industrial use on nanomaterials requires an understanding of the environmental factors that control the reactivity and bioavailability of natural and manufactured nanomaterials. Dissolved organic matter (DOM) acts as a moderator of reactivity and bioavailability for dissolved and particulate moieties in natural waters. DOM consists of a range of low and high molecular weight species that are complex and heterogeneous. It has been historically categorized based on operational definitions, rather than physical properties. In order to understand the effect of DOM on nanomaterials, there is an urgent need for information regarding specific properties of DOM, such as ligand groups.

The goal of this research was to study how cysteine, a low molecular weight metal-binding ligand, affects the composition and reactivity of nanoparticulate zinc sulfide and metallic silver. Zinc sulfide was used as a representative of nanoparticulate metal sulfide which occurs naturally in sulfidic environments. Metallic silver nanoparticles were also studied because of its wide use in consumer products. Both types of nanomaterials contain metal constituents (zinc and silver) that are expected to strongly bind to sulfhydryl-containing ligands (such as cysteine) in the environment. Serine is structurally similar to cysteine, with the only difference of a hydroxyl group in the place of the sulfhydryl group of cysteine. Therefore, serine was used for comparison as a hydroxyl-containing analogue to cysteine.

The aggregation kinetics of zinc and other metal sulfide nanoparticles in the presence of cysteine and serine were investigated using dynamic light scattering. Cysteine decreased aggregation rates of the particles, while serine had no effect on their aggregation behavior. Further experiments revealed that the mechanism of stabilization occurred through the adsorption of cysteine on zinc sulfide, which induced electrostatic charge on the particles surface. A direct link was established between the amount of cysteine sorbed and attachment efficiency, an indicator of the tendency of particles to aggregate. These results shed light on discrepancies in the literature between metal sulfide precipitation experiments conducted in our lab and work on the formation and aggregation of zinc sulfide nanoparticles on biofilms of sulfate reducing bacteria.

The early-stage growth and aggregation kinetics of zinc sulfide nanoclusters in the presence of cysteine was studied in detail using a suite of complementary techniques. Growth and aggregation experiments have been traditionally difficult to conduct due to instrumental precision issues, but newly developed analytical tools and software products have made it possible to study the early-stage formation of nanoclusters. Experiments with small angle X-ray scattering, X-ray diffraction, dynamic light scattering, and X-ray absorption spectroscopy at the extended fine structure range showed that cysteine controlled the growth and aggregation of zinc sulfide nanoclusters. The molar ratio between zinc, sulfide, and cysteine was a determining factor in the precipitation process. When zinc and sulfide were in equimolar concentrations with cysteine, very small nanoclusters of about 2.5 nm formed within 12 hours and aggregated to structures with hydrodynamic diameter larger than 100 nm. When cysteine was in excess of zinc and sulfide, aggregation was held to a minimum, but monomer nanoclusters were able to grow to about 5 nm in 12 hours. Overall, these results indicate the importance of thiol ligands on the monomer size, extent of aggregation, and aggregate structure of zinc sulfides.

The effect of metal ligands on metal bearing particle surfaces is of particular interest for manufactured nanoparticles, because they are typically coated with an organic coating during the production process. These coatings are sorbed on the particles surface and are likely to interfere between the metallic surface and the ligand. Dissolution experiments using citrate and polyvinylpyrrolidone (PVP) coated zero valent silver nanoparticles in the presence of cysteine and serine showed that cysteine dissolved both types of particles, while serine did not. Dissolution rates depended on the aggregation state of the particles exposed to cysteine. As indicated by zeta potential and adsorption measurements, cysteine replaced the coating on the particles surface and altered their aggregation pattern. X-ray absorption spectroscopy near the absorption edge showed partial oxidation of silver and formation of Ag(+I)-sulfur bonds, indicating that the thiol group in cysteine formed chemical bonds with oxidized surface silver atoms. A comparison between the two coatings showed that citrate coated particles dissolved approximately three times faster than PVP coated particles. Overall, these results show that metal binding ligands can drastically change the fate of manufactured silver nanoparticles in the environment and that this effect is moderated by surface coatings.

The results of this study suggest that cysteine, a metal binding ligand was able to induce and control transformations, such as growth, aggregation, dissolution, and surface reactivity of zinc sulfide and metallic silver nanoparticles. Cysteine adsorbed on metal sites on both ZnS and Ag particles, inducing changes on their surface charge. Aggregation of ZnS particles was slowed because of a net decrease in zeta potential compared to the bare particles. On the contrary, cysteine enhanced the aggregation of Ag particles, by replacing the citrate and PVP coatings on the particles surface. Finally, the cysteine-Ag(+I) bonds caused strong polarization on the particles surface and lead to the oxidative dissolution of the particles.

Overall, this research provides a better understanding of the fate of natural and manufactured nanoparticles in anaerobic waters, where thiols are present in significant amounts. It may also be used for risk assessment of manufactured nanomaterials and the production of safer and environmentally responsible materials.