John Howard Yoder on Christian Nonviolence and the Haustafeln 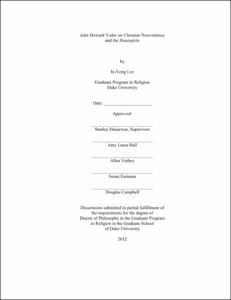 One of the focuses of John Howard Yoder's theology is Christian nonviolence. From the teaching and example of Jesus, who dealt with the evil in the world and defeated it through obedience to the will of God to the point of dying on the cross, Yoder derives the normative Christian stance of nonviolence. It is expressed in the life of the disciples in their suffering with Christ the hostility of the world as bearers of the kingdom cause and in their living out the suffering servanthood in place of dominion. For Yoder, subordination is how Christ's model of servanthood is carried out into the concreteness of family life, and it is most extensively explored in his essay, "Revolutionary Subordination," in The Politics of Jesus.

This dissertation is an attempt to read household codes in the New Testament, especially Col. 3:18-4:1, together with Yoder, with a special emphasis on the husband/wife relation. Due to an exceptionally controversial character of Yoder's essay, it seeks to understand his main points, while identifying the elements that have caused strong opposition. The fact that these Haustafel texts have been historically abused to legitimate oppression and exploitation of persons poses a warning in one's endeavor to interpret them. Particularly telling is Americans' experience around slavery during and after the Civil War. The conflicting interpretations of the Bible between the proslavery camp and the abolitionists leave us in a hard place in addressing the issue of women's status in the household and in society.

Through examining key debates on the Haustafeln in the biblical scholarship focused on James Crouch and David Balch; two alternative views on the subject in theological ethics - Yoder and Elisabeth Schüssler Fiorenza - and further discussions of their views aided by theologians such as Gordon Kaufman, Alasdair MacIntyre, and Jeffrey Stout, this study addresses issues found in Yoder and Schüssler Fiorenza. It concludes that Yoder's undue reliance on David Schroeder and his refutation of Martin Dibelius have led him to overlook the preexisting schema that was adopted and Christianized by the early church, and that he fails to name patriarchy a sin. Schüssler Fiorenza's problems are found in the areas of the biblical canon, tradition and democracy. The relevance of the slavery debates to this study is revisited through discussions of Mark Knoll and Dale Martin, and Yoder's nonviolent kingdom ethic is compared to Paul Ramsey's just war theory and backed up by Rowan Williams, Bernd Wannenwetsch, and Sarah Coakley.