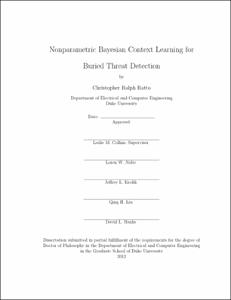 This dissertation addresses the problem of detecting buried explosive threats (i.e., landmines and improvised explosive devices) with ground-penetrating radar (GPR) and hyperspectral imaging (HSI) across widely-varying environmental conditions. Automated detection of buried objects with GPR and HSI is particularly difficult due to the sensitivity of sensor phenomenology to variations in local environmental conditions. Past approahces have attempted to mitigate the effects of ambient factors by designing statistical detection and classification algorithms to be invariant to such conditions. These methods have generally taken the approach of extracting features that exploit the physics of a particular sensor to provide a low-dimensional representation of the raw data for characterizing targets from non-targets. A statistical classification rule is then usually applied to the features. However, it may be difficult for feature extraction techniques to adapt to the highly nonlinear effects of near-surface environmental conditions on sensor phenomenology, as well as to re-train the classifier for use under new conditions. Furthermore, the search for an invariant set of features ignores that possibility that one approach may yield best performance under one set of terrain conditions (e.g., dry), and another might be better for another set of conditions (e.g., wet).

An alternative approach to improving detection performance is to consider exploiting differences in sensor behavior across environments rather than mitigating them, and treat changes in the background data as a possible source of supplemental information for the task of classifying targets and non-targets. This approach is referred to as context-dependent learning.

Although past researchers have proposed context-based approaches to detection and decision fusion, the definition of context used in this work differs from those used in the past. In this work, context is motivated by the physical state of the world from which an observation is made, and not from properties of the observation itself. The proposed context-dependent learning technique therefore utilized additional features that characterize soil properties from the sensor background, and a variety of nonparametric models were proposed for clustering these features into individual contexts. The number of contexts was assumed to be unknown a priori, and was learned via Bayesian inference using Dirichlet process priors.

The learned contextual information was then exploited by an ensemble on classifiers trained for classifying targets in each of the learned contexts. For GPR applications, the classifiers were trained for performing algorithm fusion For HSI applications, the classifiers were trained for performing band selection. The detection performance of all proposed methods were evaluated on data from U.S. government test sites. Performance was compared to several algorithms from the recent literature, several which have been deployed in fielded systems. Experimental results illustrate the potential for context-dependent learning to improve detection performance of GPR and HSI across varying environments.