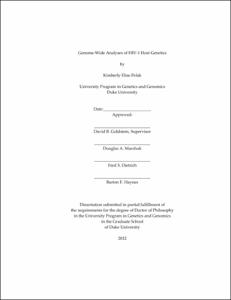 HIV has presented some of the greatest biomedical challenges in recent decades, and an understanding of how the virus behaves when it is in the human body is critical to addressing many of these challenges. One avenue through which to do this is the study of host genetics, which investigates the human genetic variants that modify the interactions between the HIV-1 virus and the human body. In my graduate work, I performed several different investigations that have furthered our understanding of the human genetic variants that either modulate the response to HIV-1 infection or play a role in the acquisition of an HIV-1 infection. This work took place at a time of transition in human genetics, and spanned both the era of genome-wide association studies as well as the beginning of the sequencing and rare variant eras.

Chapters 2 and 3 describe the identification of human genetic variants that associate with viral load set point. Chapter 2 describes a copy number variable region (CNV) in the KIR region of the genome that associates with a change in set point, and Chapter 3 describes an allele of HLA-B (HLA-B*5703) that is the largest determinant of viral control in an African American population. Both chapters use data from genotyping chips as a starting point.

In the past several years, the cost to sequence a genome has plummeted, and it is now possible for a single group to sequence and align an entire human genome in just a few weeks. This "next-generation" sequencing has dramatically changed the field of human genetics, and Chapter 4 will discuss this new technology and provide an early analysis of the patterns of variation that are observed across multiple human genomes. Notably, this new technology allows for an unprecedented amount of variant discovery, including the possibility of identifying low frequency and rare variants.

Chapter 5 describes two different projects that make use of next-generation sequencing technology to investigate variants that influence HIV-1 disease acquisition and progression. Both projects are extreme phenotype whole-genome sequencing projects. For the first project, we have sequenced individuals who have hemophilia and were highly exposed to contaminated blood products but who remained uninfected. For the second project, we have sequenced African American individuals whose disease progressed very quickly or very slowly. I compare the variants in these individuals to the variants in control populations and describe follow-up genotyping results. I have not identified a causative variant in either of these studies, although a list of candidate variants is still being pursued. These analyses have shown that there is substantial heterogeneity in the genetic basis for both phenotypes.

Overall, my work has identified two common variants that are playing a role in modulating HIV-1 infection, as well as provided the first assessment of the patterns of variation across a set of unrelated human genomes. This thesis also describes some of the early attempts to apply the next-generation sequencing technique to HIV-1 host genetics. In the Conclusion, I discuss the future of HIV-1 host genetics research and the clinical applications of human genetics.