Response of Midbrain Pain Receptors in a Rodent Model of Radiculopathy 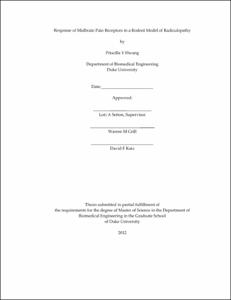 <bold>Introduction:</bold> Intervertebral disc herniation may contribute to nerve root compression or inflammatory processes that are associated with radicular pain and motor deficits. Molecular changes at the affected dorsal root ganglion (DRG), spinal cord, and even midbrain, have been documented in rat models of radiculopathy or nerve injury. The objective of this study was to evaluate gait mechanics and the expression of key pain receptors in the midbrain of rats after induced radiculopathy in order to test the hypothesis that DRG injury can promote molecular changes in the midbrain. Materials and <bold>Methods:</bold> Radiculopathy was induced by harvesting tail nucleus pulposus (NP) and placing upon the right L5 DRG in Sprague-Dawley rats. Tail nucleus pulposus (NP) was harvested and discarded in sham-operated rats. At 1 and 4 weeks after surgery, DRGs were sectioned and tested for immunoreactivity to astrocytes and microglial. Also at 1 and 4 weeks after surgery, midbrains were sectioned and tested for immunoreactivity to serotonin (5HT2B), mu-opioid (&mu;-OR), and metabotropic glutamate (mGluR4 and 5) receptor antibodies. Quantitative analysis was performed on all midbrain immunostained images and compared to naïve controls. Cerebral spinal fluid was also extracted at 1 and 4 weeks after surgery for monocyte-chemoattractant protein (MCP-1) assessment. <bold>Results:</bold> NP-treated animals placed less weight on the affected limb 1 week after surgery and experienced mechanical hypersensitivity over the entire time of the study. Astroctye activation was observed at the DRG 4 weeks after surgery. An increased expression of 5HT2B was observed in NP-treated rats at 1, but not at 4 weeks. Increased expression of &mu;-OR and mGluR5 was observed in the periaqueductal gray (PAG) region of NP-treated rat midbrains at 1 and 4 weeks post-surgery. By contrast, increased expression levels of mGluR5 in the PAG region of sham animals reverted to naïve levels by 4 weeks after surgery. No changes were observed in expression levels of mGluR4 in either sham or NP-treated animals at any point in this study. MCP-1 levels were higher in NP-treated animals at 4 weeks compared to sham animals. <bold>Conclusion: </bold> These observations support the hypothesis that the midbrain responds to injury at the DRG with a transient and adaptive change in receptors regulating pain mechanisms.