Muslim Distinction: Imitation and the Anxiety of Jewish, Christian, and Other Influences 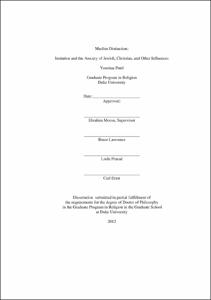 Contrary to later Muslim tradition, the first Muslims initially looked favorably upon assimilating Jewish and Christian religious and cultural practices. As Muslim collective religious identity conjoined with political power, Muslims changed their religious policy from imitation to distinction; they began to define themselves both above and against their arch-religious rivals. They visibly and publicly materialized their unique brand of monotheism into a distinct religious community.

This dissertation is the first attempt to map the Muslim religious discourse that expressed this deliberate turn away from Jews, Christians, and others across pre-modern Islamic history. First, I argue that this discourse functions as a prism through which to view the interplay of religion and politics; a key function of both empire and religion in a pre-modern Muslim context was to uphold hierarchical social distinctions. Next, I show that Muslims imagined these distinctions in very concrete terms. In contrast to conventional studies that emphasize the role of abstract doctrine in making Islam a distinct religion, this study highlights the aesthetic mediation of Muslim distinction through everyday quotidian practice such as dress, hairstyle, ritual, festivals, funerary rites, and bodily gestures - what Sigmund Freud has called, "The Narcissism of Minor Differences." These acts of distinction illustrate that Muslim religious identity was not shaped in a social and cultural vacuum; its construction overlapped with that of ethnicity, gender, class, and the even the human. What this study reveals, then, is how Muslims attempted to fashion more than just a distinct religion, but an ideal moral order, or social imaginary. In this robust Muslim social imaginary, human beings were mimetic creatures; becoming, or subject-formation, was inextricably related to belonging, being part of a community. Despite the conscious attempt of religious scholars to normalize Muslim distinction, this study contests that both elite and ordinary Muslims continued to imitate, and ultimately assimilate, foreign practices within a Near Eastern cultural landscape of sharedness.

Drawing upon approaches from religious studies, history, and anthropology, this interdisciplinary study foregrounds both text and theory. It interweaves theories of difference, imitation (mimesis), power, embodiment, semiotics and aesthetics with a broad range of Arabic literary texts spanning theology, law, Quranic exegesis, prophetic traditions, ethics, mysticism, historical chronicles, and biography. More specifically, this study highlights the critical role of prophetic utterances (hadith) in shaping the Islamic discourses of Shari'a and Sufism. It foregrounds the contributions of two pre-modern Damascene religious scholars in their historical contexts: the controversial Ibn Taymiyya (d. 1328), and the underappreciated Najm al-Din al-Ghazzi; (d. 1651), who authored a remarkable encyclopedia of mimesis and distinction hitherto ignored in both Euro-American and Islamic scholarship.