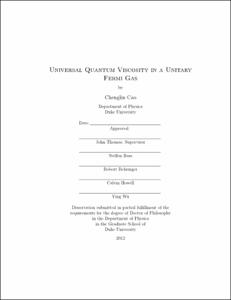 View / Download
3.7 Mb
Date
Author
Cao, Chenglin
Advisors
Thomas, John E
Bass, Steffen
Behringer, Robert
Howell, Calvin
Wu, Ying
Repository Usage Stats
326
views
623
downloads
Abstract
Unitary Fermi gases, first observed by our group in 2002, have been widely studied as they provide model systems for tabletop research on a variety of strongly coupled systems, including the high temperature superconductors, quark-gluon plasmas and neutron stars. A two component6Li unitary Fermi gas is created through a collisional Feshbach resonance centered near 834G, using all-optical trapping and cooling methods. In the vicinity of the Feshbach resonance, the atoms are strongly interacting and exhibit universal behaviors, where the equilibrium thermodynamic properties and transport coefficients are universal functions of the density n and temperature T. Thus, unitary Fermi gases provide a paradigm to study nonperturbative many-body physics, which is of fundamental significance and crosses several fields.This dissertation reports the first measurement of the quantum shear viscosity in a6Li unitary Fermi gas, which is also the first measurement of a transport coefficient for a unitary Fermi gas. While equilibrium thermodynamic quantities have been theoretically and experimentally studied for the past few year, the measurement of a transport coefficient for a unitary Fermi gas provides new challenges for state of the art nonperturbative many-body theory as transport coefficients are more difficult to calculate than equilibrium thermodynamic quantities. Two hydrodynamic experiments are employed to measure the shear viscosityηin different temperature regimes: an isotropic expansion is used for the high temperature regime and radial breathing mode is employed for the low temperature regime. In order to consistently and quantitatively extract the shear viscosity from these two experiments, hydrodynamic theory is utilized to derive universal hydrodynamic equations, which include both the friction force and the heating arising from viscosity. These equations are simplified and solved by considering the universal properties of unitary Fermi gases as well as the specific conditions for each experiment. Using these universal hydrodynamic equations, shear viscosity is extracted from the an isotropic expansion conducted at high temperatures and the predicted η ∝ T3/2 universal scaling is demonstrated. The demonstration of the high temperature scaling sets a benchmark for measuring viscosity at low temperatures. For the low temperature breathing mode experiment, the shear viscosity is directly related to the damping rate of an oscillating cloud, using the same universal hydrodynamic equations. The raw data from the previously measured radial breathing experiments are carefully analyzed to extract the shear viscosity. The low temperature data join with the high temperature data smoothly, which yields the full measurement of the quantum shear viscosity from nearly the ground state to the two-body Boltzmann regime.The possible effects of the bulk viscosity in the high temperature an isotropic expansion experiment is also studied and found to be consistent with the predicted vanishing bulk viscosity in the normal fluid phase at unitarity. Using the measured shear viscosityηand the previously measured entropy densitys, the ratio of η/s is estimated and compared to a string theory conjecture, which suggests that η/s≥~/4πkB for a broad class of strongly interacting quantum fluids and defines a perfect fluid when the equality is satisfied. It is found that η/s is about 5 times the string theory limit, for a unitary Fermi gas at the normal-superfluid transition point. This shows that our unitary Fermi gas exhibit nearly perfect fluidity at low temperatures. As presented part of this dissertation is the development of consistent and accurate methods of calibrating the energy and temperature for unitary Fermi gases. While the energy is calculated from the cloud dimensions by exploiting the virial theorem, the temperature is determined using different methods for different temperature regimes. At high temperatures, a universal second virial coefficient approximation is applied to the energy density, from which a variety of thermodynamic quantities, including the temperature, are derived in terms of the measured cloud size. For low temperatures, the previous calibration from the energy E and entropy S measurement is improved by using a better calculation of the entropy and adding constraints at high temperatures, using the second virial approximation. A power law curve with a discontinuous heat capacity is then fitted to the E-Scurve and the temperature is obtained using ∂ E/∂S. The energy and temperature calibrations developed in this dissertation are universal and therefore can be applied to other thermodynamic and hydrodynamic experiments at unitarity.
Type
Dissertation
Department
Physics
Permalink
https://hdl.handle.net/10161/5453
Citation
Cao, Chenglin (2012). Universal quantum viscosity in a unitary Fermi gas. Dissertation, Duke University. Retrieved from https://hdl.handle.net/10161/5453.
Collections
More Info
Show full item record