Urban-Rural Bias and the Political Geography of Distributive Conflicts 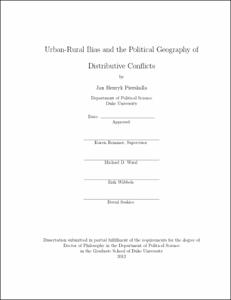 Pro-urban bias in policy is often seen as a common phenomenon in the developing world. Empirical reality though is much more varied. Many governments actively support agricultural producers and rural citizens, even at early stages of development. In addition, the binary distinction between urban and rural bias in policy aggregates over important sub-national variation in the distributive impact of government policies. This dissertation extends the research frontier by analyzing the political roots underlying spatial bias in policy using new theoretical and empirical approaches. First, this dissertation develops a theory that identifies conditions under which politicians will institute pro-urban or pro-rural policies, by considering the threat of a rural insurgency. Second, I argue that elections in rural majority societies can empower citizens in the rural periphery. Competitive elections and high rural turnout induce governments to supply favorable policies to the rural sector as a whole and salient regions in particular. To test the effect of the threat of rural violence, I use new cross-national data on net taxation in the agricultural sector. Data on fiscal transfers and the sub-national effects of agricultural pricing policies in Indonesian districts provide additional evidence for the first hypothesis. To test the effect of elections on urban bias, I exploit a natural experiment from the Indonesian context. Last, I analyze the proliferation of districts in Indonesia from 2001 to 2009, with important implications for future fiscal transfers, and show the process is largely driven by local elite competition within and between districts.