Investing in Refugee Health: The Role of Caste Hierarchy on Mental Health Among Bhutanese Refugees 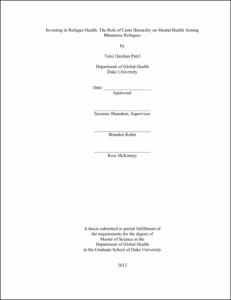 Refugee health pre- and post- resettlement is a growing global health concern as displacement and forced migration is a reality for millions of individuals across the globe. Many refugees around the world have been displaced for a combination of reasons, ranging from, but not limited to, political and religious conflict, ethnic violence, and social upheaval. Regardless of where refugees "live", they remain stateless and lack the true rights given by a state to its citizens. Unfortunately, their voices and stories go unheard as they are shuffled from one unknown to another, oftentimes remaining invisible to citizens of the state. Thus, the majority of refugees become dependent on aid provided by international organizations, which includes receiving healthcare.

This is the case for the Bhutanese refugee population, which has resided in camps set up by the Office of the United Nations High Commissioner for Refugees (UNHCR) in Western Nepal for over 20 years now. The stress and anxiety of leaving one's homeland and relocating to a foreign country can significantly impact an individual's mental wellbeing. Additional dynamics, such as cultural factors and community relationships can further impact an individual's mental state.

Working with the Kenan Institute for Ethics at Duke University, this project aims to gain a better understanding of the relationship between a traditional social factor, caste, and how it may impact the mental health of Bhutanese refugees. Additionally, it provided an opportunity for the refugees to tell their personal stories, which will be complied in an archive accessible to the global community.

A series of qualitative interviews were conducted with Bhutanese refugees living in five different camps administered by UNHCR in Western Nepal. A total of twenty-five interviews were conducted, with perceptions of health and caste being measured using a scale of 1 to 5, with 1 being that caste does not affect health at all and 5 being that caste affects health very much. Based on self-reports, while perceived caste discrimination has significantly decreased in the camps within the past several years, possibly due to better education, the strong presence of international organizations, and/or the presence of religious organizations, overall it still remains prevalent within the refugee communities in Nepal.

Many individuals, especially those of lower caste (Dalits) described how their mental health has been affected negatively in the past and/or currently due to the discrimination they face based on their location within the caste hierarchy. However, an important recurring theme was that many of the refugees stated that while caste may not matter or affect their own lives, they believe it continues to significantly impact the lives of others within their community, especially the elderly. Stories of intercaste marriage and caste discrimination at water pumps were reiterated across many interviews. Oftentimes the terms "tension" and "anxiety" were embedded in these stories in an effort to describe the individual's mental state. Based on the interviews, there appears to be a relationship between an individual's caste and their mental well-being.

Overall, this study helped acquire a better understanding of the relationship between caste and mental health within the Bhutanese refugee community, yet further research is needed to solidify the trends. The role of education, and the presence of international organizations and religious organizations pre- and post-resettlement need to be elucidated in order to better understand how these actors impact the well-being of refugees and whether it is positively or negatively, both in the short-term as well as in the long-term. Furthermore, follow-ups need to be conducted with refugees living in the United States to better understand what role, if any, caste plays once they have resettled. For example, does the same caste hierarchy still remain or has it changed, and if so, why; is there a similar relationship between caste and mental health in the United States; do the refugees continue to face issues with intercaste marriage; what role do religious organizations play regarding individuals trying to free themselves from the caste system, and finally do the refugees receive appropriate counseling and healthcare as they adapt to new cultural and societal factors. Clarifying these questions will ultimately help in assisting refugees who face mental health issues in the camps and once they resettle.