Spoken Scripture: Orality in the Texts and Codifications of Mark and the Qur'an 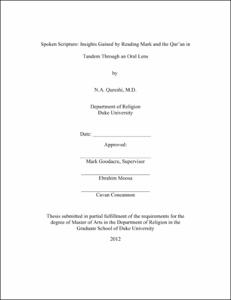 The field of orality studies has provided new perspectives and insights on a vast array of literature, including the Gospel of Mark and the Qur'an. Despite numerous historical and literary parallels between these two works, the enriched perspectives gained by orality studies have not often been brought to bear upon one another. This thesis brings Mark and the Qur'an together under an oral lens with the aim of mutually elucidating intriguing characteristics of both texts. After introducing the field of orality studies and assessing the oral characteristics of both texts, it will be concluded that both Mark and the Qur'an were composed primarily for oral recitation, that the controversial bookends of each work are a result of codifying oral tradition, and that these early texts, once codified, spurred the production of elaborative material within their own traditions.