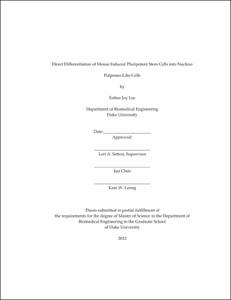 The intervertebral discs (IVD) contribute to structural stability of the spinal column, attenuate the impact of compressive loads, and enable a wide spectrum of motions. As a consequence of aging, the majority of the adult population experiences painful symptoms associated with IVD degeneration - a condition characterized by diminished integrity of tissue components. Current treatment options unfortunately cannot restore IVD structure and function. At the present, an avenue of great interest involves autologous or allogeneic cell delivery to the degenerated IVD. Induced pluripotent stem cells (iPSCs) have demonstrated their capacity to differentiate into various cell types. A posited strategy for regenerative medicine applications entails deriving iPSCs from a patient's own somatic cells and directing them toward a specific lineage.

The overall objective of this study is to assess the potential of mouse iPSCs to regenerate nucleus pulposus (NP) cells of the IVD. Previous work identified CD24 as an NP marker, while recent data from our lab noted its expression in mouse iPSCs. The first portion of this thesis employed magnetic activated cell sorting (MACS) to isolate a CD24<super>high</super> iPSC population. Notochordal gene expression was analyzed in this undifferentiated cell fraction via real time RT-PCR. Mouse iPSCs were then cultured in a laminin-rich, 3D culture system for up to 28 days, and NP phenotype was assessed by immunostaining.

The latter half of this work focused on producing a more conducive environment for NP differentiation of mouse iPSCs. This involved the addition of low oxygen tension and notochordal conditioned medium (NCCM) to the culture platform. Mouse iPSCs were evaluated for ability to adopt an NP-like phenotype through a combination of immunostaining and biochemical assays. Furthermore, they were compared to NIH 3T3 mouse embryonic fibroblasts cultured under the same conditions.

Results demonstrated that a CD24<super>high</super> fraction of mouse iPSCs could be successfully retrieved and differentiated into a population that could synthesize matrix components similar to that in native NP. Likewise, the addition of hypoxia and NCCM generated similar phenotypic results. 3T3 fibroblasts unexpectedly exhibited transdifferentiation potential as well. Altogether, these studies conclude that mouse iPSCs do have potential to differentiate into NP-like cells and may be applied to future cell-based therapies for restoration of the degenerated IVD.